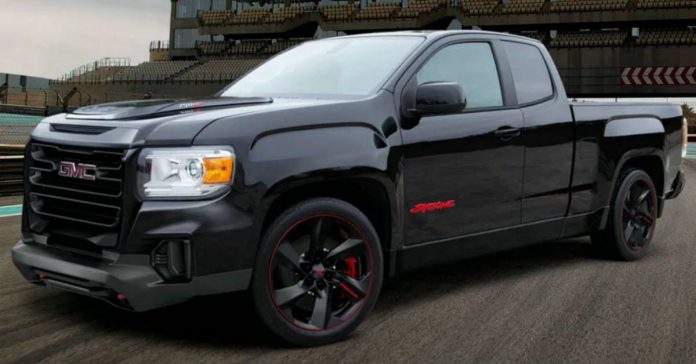 Traditionally pick-up trucks have been marketed towards the work vehicle segment of the car markets. If you were a construction worker, farmer, or pretty much anyone that needed to shift gear from place to place then the pick-up was for you.

More recently, as is evident with the likes of the F-150, pick-up trucks have become more popular with a large portion of owners buying them for recreational uses. More modern vehicles are commonly based on shared floorplans, borrowing heavily from more traditional sedan style cars. With this adoption of technology comes refinement, comfort, and of course more powerful engines.

In the final production year, Holden released the HSV Maloo R8 LSA as the final model in the “Utes” history. Based around the 6.2-Liter V8 LSA engine, supercharged to increase power output to supercar rivaling 536bhp.

Weighing in at 3800lbs this is no lightweight track car, but more outback dragster, performance is very respectable with a 0-62mph time of 4.5 seconds before reaching a top speed of 155 mph. There are no confirmed reports that the Maloo can achieve these times either loaded or while towing – surely someone must’ve tried this?

Originally launched in 1975, the Ford F-150 is still going strong today, and even 45 years after its launch the F-150 is still the best-selling vehicle in America. In 2020 Raptor spec the F-150 comes with ford’s Ecoboost 3.5-Liter V6 engine, with power increased to 450bhp by the use of twin turbochargers.

Capable of sprinting from 0-62mph in 5.1 seconds, however, due to the size and 5525lbs weight (Supercab) top speed has been electronically restricted to 107mph. Ford motors have always been popular with aftermarket modifications, so anyone wanting more power and top speed will be easily catered for.

Hennessy will take a stock F-150 and transform it into the Venom 775, a pick-up truck capable of out-dragging a stock GT350 Mustang. As the name suggests the power output has been raised by the inclusion of a 2.9-liter supercharger, producing 775bhp and an equally impressive 550lb-ft.

Drive to all four wheels via the 10-speed paddle-shift gearbox will see 0-62mph come up in just 4 seconds, with a top speed no doubt restricted by the aerodynamic drag of around 165mph. Hennessey is planning to build just 100 examples of the Venom

Launched as the spiritual successor to the 1990s GMC Syclone, the Canyon picks up where the old model left off. In SVE trim, power from the supercharged V6 has been increased to a more useful 455bhp, while the body and ride height has been lowered to improve handling.

Starting life fresh off the production line weighing over 5200lbs, the Silverado makes do with just 420bhp from its stock engine. Enter SVE, who produces the Yenko edition, featuring an uprated supercharged LT1 V8 engine, producing 800bhp, and more importantly 750 ft-lbs of torque.

As with most high-performance trucks, top speed is restricted by aerodynamic drag, in the case of the Silverado topping 150 mph reaching 62mph from standstill in a supercar baiting time of just 4.3 seconds.

Launched in 2019, the current spec Dodge RAM R/T despite appearances is fractionally lighter than the previous model, less weight, in theory, improves performance – although weight saving is officially for better fuel economy. Power comes from the tried and tested Hemi 5.7-liter V8 engine, producing a useful 395bhp and 410 lb-ft of torque.

Despite having a curb weight of 5200 lbs, the RT is still able to reach 62 mph in 5 seconds, sadly this truck has been limited to 105mph – though having the limiter removed should be fairly straight forward.

Any gearhead will recognize the TRD branding, not that this Tundra features any external TRD logos to give away its secret. The Tundra is popular for being well-built and reliable, but certainly not for its performance.

TRD changed that, taking a stock 381bhp V8 engine, adding a supercharger top raise power 500+bhp, and 550 lb-ft, both figures way into supercar territory at the time. Sprinting from 0-62mph in 4.4 seconds is more than enough for any adrenaline junkie.

RELATED: Tacoma vs Tundra: Which Toyota Pickup Is The Right One For You?

Unfortunately, Isuzu only ever produced one of their Como super Trucks, and there are no performance road test figures available. However, it is a worthy inclusion due to the unique design and engine used. Few people are aware of the brief appearance of Isuzu in Formula 1 racing in collaboration with Lotus.

Featuring a 3.5-liter V12 engine with an insane rev limit of 12,500 rpm yielding in final spec a very useful 640bhp. How much space is left for cargo after the installation of the engine is not clear, but it probably wouldn’t cause other manufacturers many sleepless nights.

Looking like a cross between a Star Trek prop and something a young child with a ruler has designed, the Tesla Cybertruck isn’t exactly a looker. In All-wheel-drive specification the Cybertruck is fast, utilizing three electric motors gives the truck a supercar beating performance with 0-62mph taking just 2.9 seconds.

Despite the unusual looks and startling acceleration, the truck has a decent load-carrying capability with a rated maximum load of 3500lbs and comes with a claimed 500+ mile range between charges.

With a more conventional appearance, the recently announced Rivian R1T pickup truck will undoubtedly attract more potential customers than the Cybertruck. With a planned three levels of specification for the battery packs, owners can expect the mid-level option to have a range of around 300 miles.

As with other electric vehicles, the high torque figures from the electric motors provide the R1T with very ample pulling power that reflects the 0-62mph time of 3 seconds.

NEXT: 10 Trucks That Are Completely Useless Off Road (5 That Are Unstoppable)