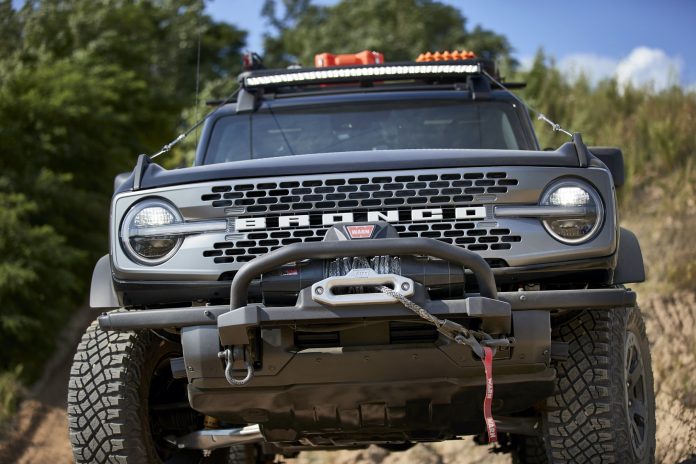 Ford is cranking up the pressure on Wrangler and other SUVs, by doubling-down on the 2021 Bronco’s bulging accessory portfolio. Official add-ons for the upcoming truck – along with the 2021 Bronco Sport that will launch later this year – were given equal billing in Ford’s big Bronco announcement last month, and now it’s showing just what can be done with that selection.

Five concepts have been cooked up, but unlike most concept cars the idea is that eventual Bronco owners should be able to replicate them if they so wish. Ford’s catalog will have over 200 accessories for the Bronco, and over 100 for the Bronco Sport, including things like cutaway doors, soft-top roofs, and LED light rigs.

The “Bronco Four-Door Outer Banks Fishing Guide,” for example, envisages how a keen fishing enthusiast might want to equip their truck. Based on the four-door Bronco Outer Banks, it adds a Bestop Sunrider first-row soft top, factory-style roof rail and crossbars, and a Yakima LockNLoad Platform roof rack. Trail sights are used to mount a custom-made fishing pole and seat perch, and there’s a modular front bumper and safari bar from Ford Performance, all-weather mats inside, and other water-safe trim.

If it’s off-roading that floats your boat, the Bronco Two-Door Trail Rig based on the two-door Badlands may do the trick. It has a Ford Perofmrnace modular front bumper, tube doors, beadlock-capable wheels and 40-inch RIGID LED lightbar, plus a WARN winch and a Yakima Platform roof rack system with accessory mounts. Inside, rugged floor mats and a rear swing-gate-mounted table promise to be resilient enough to live up to dunes and mud.

The Bronco Sport Trail Rig, meanwhile, is a smaller, more attainable version of that. It has 31-inch BFGoodrich Mud-Terrain T/A KM3 rubber and a one-inch lift on the Badlands trim, then adds RIGID LED off-road lights on a front nudge bar. The Bronco Sport Off-Roadeo Adventure Patrol also has a Yakima LockNLoad Cargo Platform, but fits it out with recovery gear; there’s also a Yakima interior bike rack with space for two bikes, and a drone target for easy landings after reconnaissance.

Finally, there’s the Bronco Sport TOW RZR, which pairs Badlands trim with more towing and cargo accessories. Yakima HD Bar crossbars and an OffGrid medium cargo basket work alongside a Class II Trailer Tow Package that can handle up to 2,200 pounds of capacity.

It’s hard to overstate the importance that accessories, and indeed detailing in general, plays when it comes to a vehicle which is as much about perceived lifestyle as it is actual use on the road (or off it). For the Bronco, Ford’s big risk was delivering a truck that didn’t live up to expectations about the storied name. By launching with a sizable array of customization potential out of the gate, it means Bronco and Bronco Sport owners will stand more of a chance of feeling like they’re driving something special, rather than just a “reboot” of the classic nameplate.

That’s a strategy that has served Jeep well with the Wrangler over the years, and indeed availability of official and aftermarket parts for the iconic SUV has arguably been a key factor in its continued success. Ford is clearly looking to do much the same for the Bronco right out of the gate – even much of its official launch photography showed modified and customized trucks rather than pure factory-spec versions – as it tries to steal marketshare from its key rival.

‘Greedy’ bosses not paying out