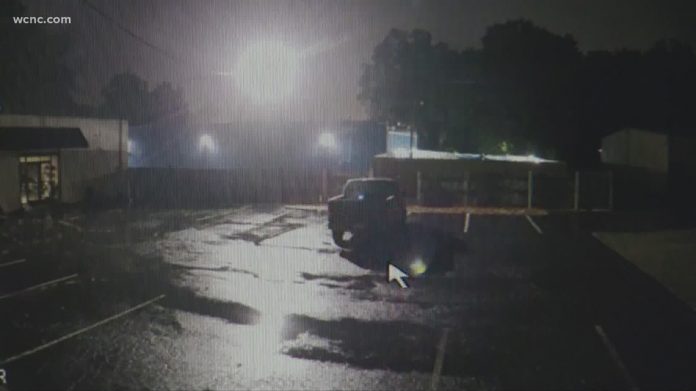 CHARLOTTE, N.C. — A small business in East Charlotte is hoping someone recognizes a surveillance photo of a robber they say stole more than $25,000 in merchandise from their store, late Wednesday night.

The Hearth and Patio, an outdoor and patio furniture store located at 4332 Monroe Road, in Charlotte, says an employee arrived at the store early Thursday morning and discovered the store had been robbed.

The store owners say they quickly began looking through their surveillance system, noting they have several cameras around the property – and say they were shocked at what they saw.

Surveillance video shows two people cutting through a side fence and begin to remove furniture. Not long after, a camera on the opposite side of the property shows their blue pick-up truck knocking down a portion of a wooden fence.

For nearly seven hours, the two suspects carry furniture piece-by-piece, and load it into their truck. Then around 5:30 a.m. surveillance video shows the truck again plow through the fence to get away.

The store’s owners say they were surprised the robbers were so bold.

“Took their time and seemed not to be in a hurry or nervous about being caught, but even more surprising was how bold they seem to be, that they just didn’t seem to think that they were being watched or that anything was going to happen,” says Spurr.

Spurr says the robbery is a devastating blow to her small business, which has been part of the community for years.

“Yeah, its very unsettling. We work hard to have a place here and its just not right that they can come and take it,” she says.

What’s worse, Spurr says a closer look at surveillance video from earlier in the day Wednesday, shows the same blue pick-up truck drive into the parking lot and take a look around, before driving away.

“They had been here during the day, obviously looking for a way to get in,” she says.

Nikola Stock (NKLA) Jumps Over 22% This Week: Buy Or Sell?

New Restaurant, Retail Openings; Other Businesses Shut Down Or Change Due...