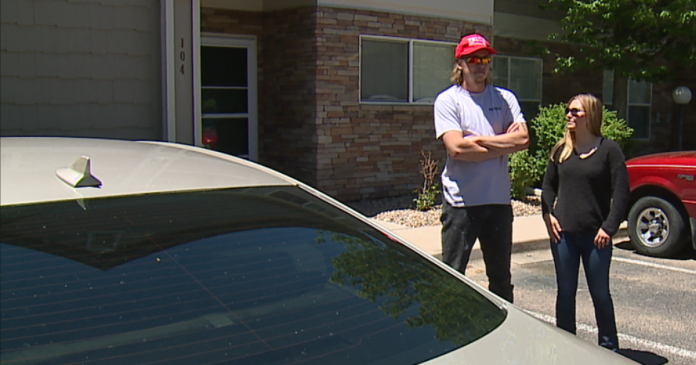 Editor’s note: Contact7 seeks out audience tips and feedback to help people in need, resolve problems and hold the powerful accountable. If you know of a community need our call center could address, or have a story idea for our investigative team to pursue, please email us at contact7@thedenverchannel.com or call (720) 462-7777. Find more Contact7 stories here.

DENVER — Telling you a lot more cars are being stolen in Denver this year doesn’t do justice to how serious the problem is or what may be behind it.

So, Contact7 has the story of one couple, two stolen trucks, and a police chief in search of a solution.

“I came out and turned the corner where it was parked, which was right here, and it wasn’t there,” said Bryner Hardy, recalling the moment he realized his 2005 Ford F-250 Lariat had been stolen from his condo parking lot in southwest Denver. “I felt very violated, very upset, very mad.”

At first, his girlfriend Ashlee Gutzke thought he was joking.

“I’ve lived here all my life, and I’ve never seen anything like this,” said Gutzke. “I think we’ve got some horrible luck.”

One week later, their 1990 Toyota SR5 pickup was stolen, too.

Denver’s Chief of Police Paul Pazen said after a drop in auto theft numbers last year, property crimes including auto theft are up significantly in 2020.

“Unfortunately, this year, we are seeing an uptick primarily in southeast Denver that is driving the numbers, but we are most certainly up compared to last year,” said Pazen.

“I would say in many respects there are some contributing factors,” he said, pointing to non-violent offenders let out of jail early because of Coronavirus. For example, police cited Marrissa Duran, who was arrested in Lakewood on an Auto Theft Complaint this month, and within 24 hours, arrested again in Denver on another charge of auto theft.

Specific pickup truck models such as Ford F-250, Ford F350, and Chevy Silverado are at the top of the list, and DPD has been posting warnings telling people how to protect their vehicles, even offering free anti-theft devices for those models in specific neighborhoods hit hard.

But that won’t get Gutzke and Hardy’s trucks back.

“I’ve poured money. I’ve poured blood, sweat and tears into these vehicles,” Harney said. “One was my grandpa’s truck he had for 30 years. They were more than just vehicles; they were super sentimental to us.”

They are hoping someone will see the distinctive American Flag tailgate on the Ford or the 1990s Toyota with 600,000 miles on it and call them in.

But their new truck will have a tracking device.

“If it gets stolen again, what are you going to do? You can’t control it,” said Hardy. “You can only try to prevent it.”