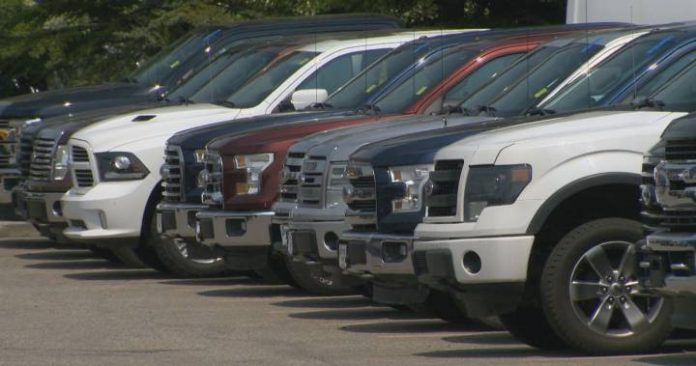 Wellington County OPP say nine pickup trucks were stolen and eight others were damaged at a Ford dealership in Fergus, Ont. over the weekend.

Police were called to Reliable Ford Dealership on Tower Street on Sunday morning where they discovered that several brand new F-150’s, F-250’s and F-350’s were missing.

The stolen trucks are worth about $700,000 combined while another $80,000 in damage was caused to eight other vehicles in what police believe were attempted thefts.

“The damage occurred when the suspects attempted to remove the front driver [or] passenger side door handles,” OPP said in a news release.

Several licence plates were also stolen off of vehicles that were in the dealership lot.

2:02
Five people arrested for stealing millions worth of vehicles

Five people arrested for stealing millions worth of vehicles

According to a post on its website, Reliable Ford’s sales department has been closed due to the coronavirus pandemic.

Police said they have obtained surveillance video which shows the vehicles driving southbound on Highway 6 towards Guelph.

“It is believed the suspects have extensive knowledge of vehicle anti-theft devices and have the means to obtain numerous vehicles at one time, in one event,” OPP stated.

8 Reasons Why The Ford Ranger Is The Best Midsize Truck...