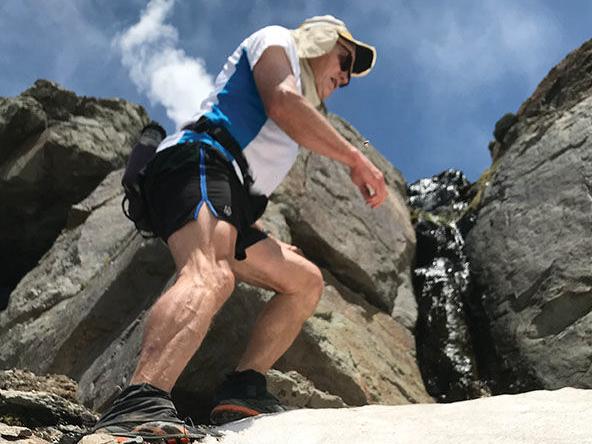 The mountain weather forecast one day last week predicted clear skies until 1 p.m., then a 30% chance for rain and thunderstorms. Planning a solo run from Silverton to the top of Kendall Mountain and back, I had wanted to plan ahead properly.

“Planning ahead properly” can mean considering canceling, or choosing a lower elevation objective, or carrying more emergency gear than usual.

Especially on a solo outing on foot, many variables need to be figured before tackling high-altitude, to lessen the chance of burdening any Search-and-Rescue (SAR) organizations.

I read that San Juan County and Silverton were fully open and welcoming visitors again (after having forbidden non-resident visitors two months ago). I understand the crucial need for a small population county to avoid losing any SAR personnel to quarantine due to potential rescues of visitors.

The summit of Kendall Mountain is accessed not by a trail but a mining road frequented by jeep and 4WD traffic. At least the lower six miles of it is; however, the uppermost 250 vertical feet is only accessible by foot (and hands, too, due to its steepness and lack of even a trail).

One might reasonably assume that the many 4WD vehicles seen on that route on average June weekends in recent years could, in case of accidental injury, be some help.

Such an assumption would have some real holes in it, though.

“Tell someone your planned route and expected time of return” is almost always good advice, if traveling alone. I know, it can seem like overkill or seem limiting to the adventurer’s spirit, but it is not just good sense, but common courtesy.

Having told a trusted friend of my plans, I still elected to bring my cell phone, though knowing that cellular signal is not available at all points in mountainous terrain, coverage varies widely among carriers’ phone plans.

Also, I took a personal locator beacon with satellite phone capability, the size of a small brownie. I chose not to turn it on, until and unless needed. It is not uncommon to read about an experienced, healthy outdoors adventurer who sustains an injury leading to a poor outcome. Many of these cases could have turned out very well, had he or she been carrying such a device.

What other “what ifs” must one consider before running up to the snowfields at elevations higher than the trees can grow? If a person heads into the mountains without possessing a Colorado hunting or fishing license, a screaming good deal is to spend twelve bucks for a five year term for the Colorado Outdoor Recreation Search And Rescue (CORSAR) card.

Not insurance, it reimburses the SAR organization whose services may, one fine day, be needed by even the most fit, knowledgeable, and skilled outdoors enthusiasts. While you are thinking of it, and with tomorrow being the official first day of another enticing Colorado summer, lay this down and get yourself one by going to the site for the Department of Local Affairs at http://dola.colorado.gov/sar.

Whew! For all of that preparation, it had better be a spectacularly awesome sight from up high on that mountain. Those of you who have run, hiked, or Jeeped up Kendall Mountain know that it is just that.

Having parked in town and strapped on my beltpack of gear for the running that lay ahead, I made one last stop. I walked into the open roll-up door of the EMT/SAR bay.

The staff on duty confirmed that my intended route of mining roads was indeed allowed now. They informed me of the many snowfields which were still blocking the road above timberline, and wished me well.

In the several hours I was on the mountain that day on foot, only one vehicle passed me. It was a shiny new 4WD truck.

Above timberline, I ran by it where the driver had parked it, facing uphill, where the first snowfield blocked the road. I exchanged greetings with its occupants as they were returning from a short walk in the snow.

An hour later, coming down from the summit, it was unsettling to see their vehicle still in that spot, now with the hood up. Tools in hand, a lone dirt-biker was trying to assist the driver to work on the shifting mechanism, which had refused to shift into either neutral or reverse.

After politely asking to be sure that they had cell phones with a charge, and having them decline any help from town, I continued my run back down into town. I had gotten their agreement that they would at least notify EMT/SAR when they did get off the mountain that day.

As my tired legs ran me back into town, I again stepped in the open bay door and mentioned that situation to the staff.

Many is the time it is great to be traveling on foot, on purpose.

John T. Unger is a Diplomate of the American Chiropractic Board of Sports Physicians, with over twenty-five years of practice in Montrose. Don’t we all love getting up into the peaks! Ideas for future columns are welcomed at sportsdocunger.com.

Enter to win a Traeger Pro 780 Grill when you subscribe!

The Traeger Pro Series is the best-selling pellet grill in the world. Promotion ends May 21st

Truck smashes into a house with a driver and passenger rescued...