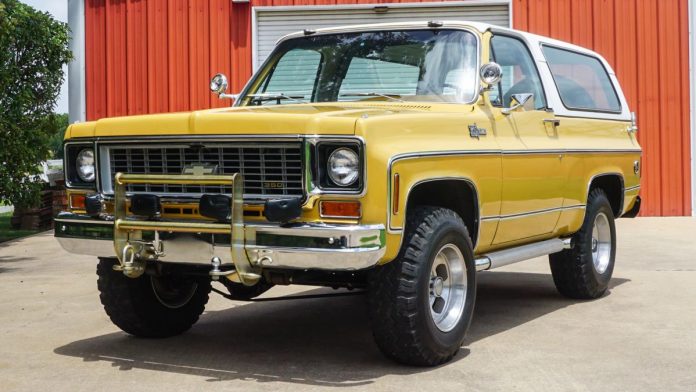 I know it’s been nearly two weeks since we first got a reimagined Ford Bronco to complement the JL Jeep Wrangler on mall parking lots in left lanes on rutted off-roading trails, but there’s one thing I can’t stop thinking about: The reborn Chevy Blazer that could have been. And this Sunset Gold and white-roofed 1974 specimen of the original K5 truck isn’t making it any easier to move on from the notion.

I know this isn’t a new thought. I’m not alone in shaking my head in confusion and disappointment about the lack of a serious 4×4 effort to take on the Bronco and Wrangler from General Motors. Our very own Raphael Orlove delved deep into the reasons that it didn’t have to be this way. But when you really get down to it, it’s almost more frustrating that GM’s past offerings were good enough to warrant this kind of nostalgia than the fact the company can’t get out of its own way to build something desirable and exciting today.

I remember exactly when I really came to love the second-generation K5 Blazer. When I was in middle school, a now-defunct Israeli off-road magazine ran a story on a rare 6.2-liter (or -litre, as the incredibly rad hood ornament read) Detriot Diesel-powered example, totally built for off-road adventures with steel bumpers, 30-inch-plus tires, and plenty of other severe upgrades from stock. I can’t find the article to link, unfortunately, but it was a monster, melding unmistakeable American lines from the C/K with local 4×4 style. Since then, I think the K5 Blazer has been my favorite domestic SUV. Seriously.

Of course, this one is a far cry from the smoky diesel sand-crawler I remember from when I was a kid, but it’s no Avis-spec anonymous blob, either. Instead of the oil-burner, this one has a numbers-matching 350 small-block under the hood driving a five-speed manual transmission, standard A/C and padded roll-bar and removable roof. That’s the kind of luxury you got with the Cheyenne package back then.

But beyond the stock features, what makes this car so alluring is the set of period-style mods. One of the best (and worst) parts of off-road culture has always been mod culture, regardless of whether the gear you’re rocking is performance-oriented or just there to look cool. Thing is, back in 1974 there were no angry-eyes headlap covers, blinding LED lightbars or punisher decals. What this truck has instead is a set of changes that are subtle yet effective. They’re just tops. Tops.

So what have we got? Slotted Alloys. Chunky Tires. Bigger intake manifold. Bigger gas tank. CB radio. Side pipes. Did you hear that? IT HAS SIDE PIPES. Like a Dodge Viper. And they look excellent. All of this takes an already great truck and makes it incredible. When you remember that the Blazer was this good, the utter ridiculousness of GM’s decision to fold on the 4×4 market is almost maddening. They love the legacy of the Corvette. They even looked back long enough to reboot the Camaro. But the Blazer? Lost to fleet-spec obscurity just below the Equinox. At least I think that’s where it slots into the Chevy crossover lineup.

This 1974 Chevrolet K5 Blazer is on offer at BringATrailer here. The odometer reads around 15,000 miles, the truck having supposedly sat unused for three decades. The auction ends on Thursday so your chance to pick up this K5 is running down, but there are more out there, teasing us with thoughts of what could have been.

Fueled by quarantine end, cycles and kayaks in high demand |...