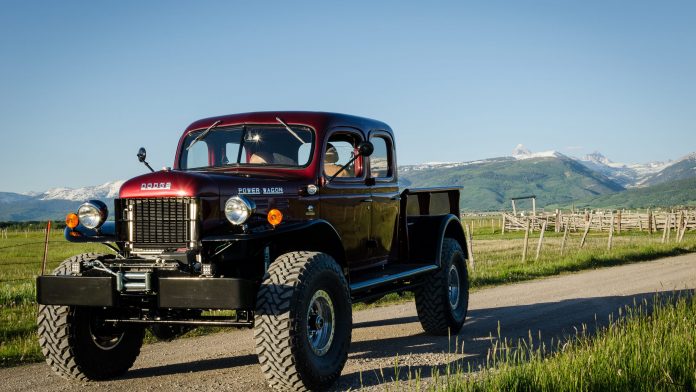 The Legacy Power Wagon Conversion is hand-built from an original chassis and offers modern features like a Cummins diesel or Chevy V8 and luxurious interior materials. (Photo: Legacy Classic Trucks)

The ultimate pickup truck status symbol has arrived, and it’s a rebuilt 71-year-old Dodge Power Wagon, America’s first mainstream four-wheel-drive pickup and brother to the Dodge military trucks that carried men and weapons in every theater of World War II.

If all your neighbors have Ferraris and every oil baron at the Cattleman’s Club drives a loaded Escalade or F-150 King Ranch, Legacy Classic Trucks has a hand-built classic that will make for you the vehicle people will line up to see  — for $350,000.

More if you’ve got special requests, and with a truck so unique there are precisely 108 in the world, why be shy?

Built in the shadow of the Grand Tetons, Legacy specializes in “resto-mods” of classic four-wheel drive trucks. The vehicles are rebuilt from the ground up, with modern engines and some conveniences. Power Wagon No. 108 is a reworked 1949 model with a twin-turbo Cummins diesel engine and a raft of features unimagined when the pickup was new.

Despite those changes, company founder Winslow Bent says Job 1 is respecting what the original truck was known for.

Dodge built thousands of military and civilian Power Wagons from 1940-72, but none of them looked or  performed like this. The Legacy Power Wagon Conversion gleams, painted by hand, with a wooden bed and leather upholstery that gain character as they age.

The Legacy Power Wagon Conversion — don’t call the restored truck a Dodge, the Fiat Chrysler brand is not involved — “is an ultimate piece of Americana,” says Winslow, whose father had an original Power Wagon, “People are paying for authenticity. We modernize it, so the truck is useful today, without losing its soul.”

The Legacy Power Wagon Conversion is hand-built from an original chassis and offers modern features like a Cummins diesel or Chevy V8 and luxurious interior materials. (Photo: Liam O’Neill)

“How do I improve the truck without losing what made it cool?”

Nearly seven feet tall and with a 144-inch wheelbase, the 108th Power Wagon Conversion began with a 1949 chassis and rides on 40-inch Toyo tires — from a plant in Georgia. Every part is made in the USA.

Legacy offers Power Wagon conversions with a Cummins turbodiesel or gasoline V8 from Chevrolet or Chrysler. With a five-speed manual or four-speed automatic transmission.

The Power Wagons can cruise at 80 mph on the highway and tow an 8,000-pound trailer over a mountain pass, Bent said from his office in Jackson Hole, Wyoming, where there are plenty of mountain passes to test that promise. Top speed is 100 mph, though it’s hard to imagine many people have the nerve to hit triple figures in a 3½-ton vehicle with its roots in the 1940s.

Four-wheel drive was not widely known in America before WWII, Bent said. “After the war, we began building highways and huge public-private projects in the West. People said, ‘I want what we had in France, or the Philippines,’ ” and demand for the civilian Power Wagon was born.

The Legacy Power Wagon Conversion is hand-built from an original chassis and offers modern features like a Cummins diesel or Chevy V8 and luxurious interior materials. (Photo: Legacy Classic Trucks)

Each Legacy Power Wagon truck is hand-built to order by a staff of about 12 in a 10,000 square-foot facility in Driggs, Idaho. Each truck requires about 2,000 hours of labor — one to two years’ work. Ten or 12 trucks are in production at any given time.

There’s no shortage of donor chassis for restoration and modification. People didn’t save early Power Wagons, they worked them into the ground and left ‘em where they lay.

“Sometimes the restoration begins with a chainsaw to cut out a tree that grew up in the middle of the chassis,” Bent said. “We’ve sent families of raccoons scrambling.”

More: Your next car could be virus-proof. Here’s how.

“If you ordered today, we could start work on your truck in about six months,” Bent said. Customers put their fee — starting at $250,000 for a regular cab Power Wagon, $300,000 for extended cab, $350,000 for four-door, the most frequent order — in an escrow account. They get regular photos of the truck in progress, and can access a website to see when some of their money was spent on an engine, wood cargo bed, etc.

In addition to Power Wagons, Legacy builds resto-mods of Toyota Land Cruisers starting at about $80,000 and 1955-59 Chevrolet Napco 4wd pickups starting around $200,000. “Napco,” was the name of a dealer-installed 4wd conversion package for rear-drive pickups, the only kind Chevy built at the time.

Legacy also turns the chassis of old CJ5 Jeeps into Scrambler pickup recreations for $150,000 up.

Workers learn the ropes starting by sweeping up and graduate to every job in the plant, which does all assembly and painting.

In addition to the modern drivetrain, Legacy Power Wagons offer:

Is There a Record Fish in Lake Isabella? – Kern Valley...