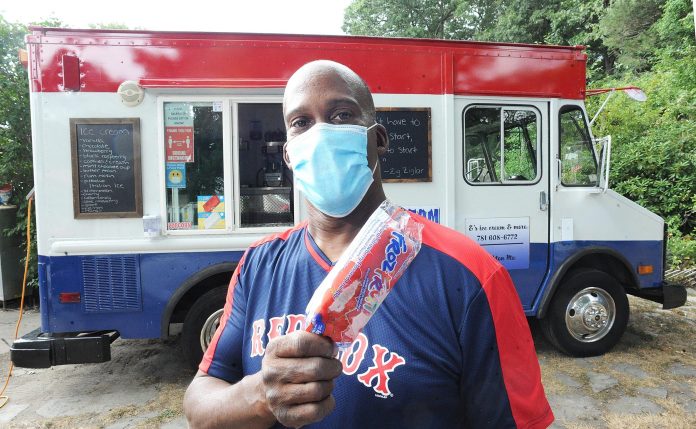 E’s Ice Cream and More was launched by Leroy Lynch with the help of his wife, Jessie, earlier this summer, with a plan to use it for events while making pit stops at community areas like pools and parks along the way.

BROCKTON — While you won’t catch Leroy Lynch’s ice cream truck perusing city streets with the classic jingle drawing out young customers racing out to greet him, he’s still doing his part to provide sweet treats around the community.

E’s Ice Cream and More was launched by Lynch with the help of his wife, Jessie, earlier this summer, with a plan to use it for events while making pit stops at community areas like pools and parks along the way.

Even in it’s first season, the truck has already made an appearance at birthday parties and events around the Brockton area, Lynch said. He has also connected with parents in the area to schedule the classic ice cream truck “drive-by” as a surprise for their kids.

“If I talk to the parents, I’ll give them my card, basically tell them if they get a moment, they can give me a text and I’d ride by their street,” he said. “That way, it works out for everyone. I know I’m going to go by that street (and) they have a little something to give to the kid.”

Lynch retired this year after working as a public safety officer at Boston University for 18 years, he said. But with retirement, he said he faced one question: What do I do with myself now?

With his prior work as a mechanic, even helping a friend to fix up ice cream trucks decades ago and owning a garage in Florida himself, he bought an old ice cream truck that was being stored in a backyard in Bellingham.

That ice cream truck was one of a small fleet seized in New York due to unpaid fines, he said, but with a fresh coat of paint bringing it from pink and green to a more patriotic red, white and blue color scheme, it has found new life in Brockton.

And so far, despite the ongoing coronavirus pandemic, business has been good, he said.

While he does offer the classic ice cream truck offerings, like Spongebob “face” popsicles and Choco Tacos, he also offers a variety of hard ice cream flavors from Hood, such as vanilla, chocolate, strawberry, butter pecan, pistachio and black raspberry. In addition, there are a variety of Italian ice options, soft-serve vanilla for events only and two options for frozen fruit bars, strawberry and coconut, that are vegan, he said.

The business is a family affair, with Jessie serving as the “manager” while he keeps the truck running, he said, though the couple’s three children together, for whom the truck is named after since their names all start with E, play a role in helping to restock products.

“They kind of eat too much ice cream, but they do help out,” he joked.

Once the weather gets colder and out of the typical ice cream “season,” he’s hoping to use the truck as more of a hybrid food and ice cream truck business by offering hot dogs and chili dogs, he said. Along with ice cream currently, he has also been offering popcorn, which has been just as popular as the ice cream, he said.

“At parties, the popcorn is a hit,” he said. “It’s almost as close to the ice cream (in popularity). The popcorn is like movie popcorn. You’d have to taste it to believe it.”

While he would limit food operations to the popcorn, hot dogs and chili dogs, due needing to add features to the truck like more ventilation if cooking other items like burgers, he’s hoping to offer both food and ice cream next season.

And despite the ice cream truck being a new venture to take up his time during retirement, he’s open to expanding the venture to add another truck, which he would make a “health food” truck with items like smoothies for Jessie, who is also looking to add more vegan ice cream options to the current truck, he said.

Though he’s been doing business in surrounding towns, such as Stoughton and Bridgewater, he’s hoping to do more business in Brockton, hopefully utilizing the “food” part of his business if the city eases restrictions on food truck operations in the city, he said.

“If I could do more in Brockton, of course, it would be better for me,” he said. “I don’t know who else is out there as far as ice cream trucks.”

E’s Ice Cream and More can be found on Facebook and Instagram, with bookings available by emailing esicecreamandmore@gmail.com. Staff writer Corlyn Voorhees can be reached at cvoorhees@enterprisenews.com. You can follow her on Twitter at @corlyn_ENT.