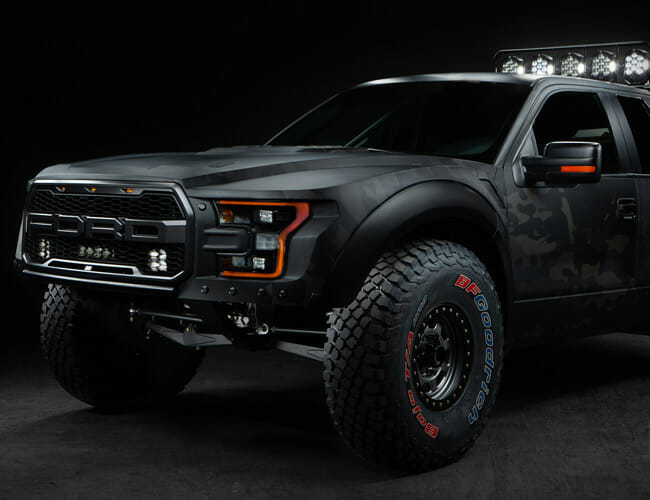 The Ford F-150 Raptor is the preeminent badass off-roading truck on the market — at least, until Ram weighs in with the Hellcat-powered Rebel TRX. But Raptors are popular; indeed, they’re everywhere. Some buyers may need something more unique, exclusive, even extravagant. For that buyer —  specifically, as it were, the owner of the Los Angeles Dodgers — Jimco Racing built the Raptor-based Jimco Reaper Luxury Pre-Runner.

The truck uses a custom Ford fiberglass Raptor body, but that’s about the extent of its Ford-ness. Beneath that is a Jimco “Victory” Pre-Runner chassis used on their previous luxury Pre-Runner builds. In perhaps the biggest affront to Ford fans, the engine is a GM-based 9.1-liter Dougans Racing Engine putting out 800 hp — the stock Raptor has just 450 — and 700 lb-ft of torque. The transmission is a Gearworks four-speed automatic.

Plan to go off-roading? You’d better; this truck runs on massive 40-inch BFGoodrich KR3 Race Tires, which are competition tires not approved for highway use. The standard Raptor gets 13.9 inches of suspension travel; Jimco’s rig boasts 26 inches at the front and 32 inches at the rear. Since this best of a truck may require some stopping power, it also features Brembo six-piston brakes with 14-inch rotors.

Yet while you may think this would be a stripped-out race truck on the interior, it offers plenty of creature comforts. The Reaper has a pleated leather interior, a Momo suede steering wheel, dual Jimco AC cool air units, and cupholders. (Even extreme desert racers need their coffee.)

Jimco Racing did not note how much the Reaper cost to build, though a fully prepped used truck build on their site is selling for $250,000. So you can likely extrapolate from there how much a new custom build would set you back.

In-depth Analysis of How COVID-19 is Impacting the Automatic Truck Landing...