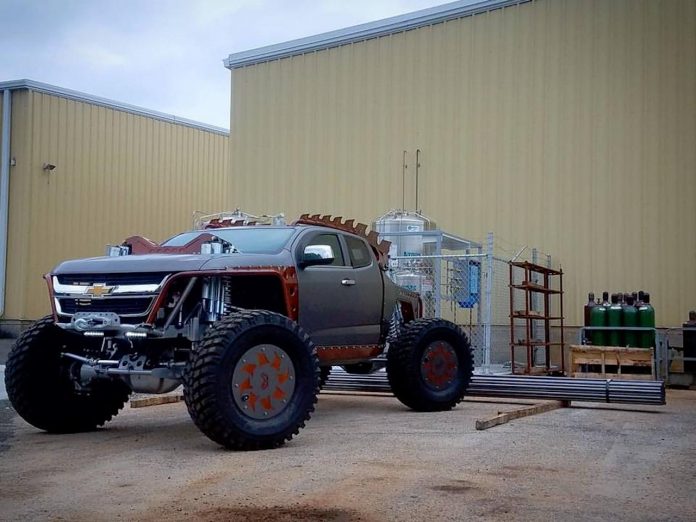 The Chevy Colorado is one of our favorite pickup trucks on the market today. Helping to reignite the midsize truck segment since its debut, the not-so-small truck has become increasingly popular with off-road fans. The team over at Fab Fours in South Carolina share this appreciation for the Chevy truck, turning one into this absolutely insane truck dubbed the Kymera.

Kymera started its life as a standard 2015 Chevy Colorado, not that you’d really be able to tell looking at it. The pre-runner mixed with trail smasher is one of the coolest looking projects we’ve seen in some time, despite the fact that the build took place in 2017. The goal for the project was to build a vehicle that is over the top and absurd, according to the shop’s owner. We are apt to believe him.

When you first look at the Kymera, it’s hard not to notice the large suspension components that are protruding from the hood. This is because the stock engine has been removed, and in its place sits a 5.9L 12-valve Cummins diesel engine. Actually, the 650 horsepower inline-six has been placed inside the Colorado’s bed, in order to make room for the trick set-up. This includes hardware such as front and rear Fox Racing 4.4 Quadruple By-Pass Shocks, Fox Racing 3″ Remote Reservoir Coil-Overs, Fox Racing 2.5 x 2.5 Hydraulic Bump Stops, a 3.8 Atlas Transfer Case, Carolina Driveline Driveshafts, and some Currie Antirock Sway Bars. The axles have even been borrowed directly from an MRAP, so you know that they are tremendously tough.

The builder is the first to admit that when you’re are in the truck, there are a few compromises to be made. You can’t really see out of it, and most of what you hear will be a result of the massively powerful diesel that is sitting right behind your head. The top speed that someone can safely drive this Chevy Colorado is only about 45-50 mph, as higher speeds present some interesting handling characteristics. That being said, if you keep this thing moving under 10 miles an hour, we are certain that there is nothing that could stop it.

The Name Says It All: Fuso Philippines introduces the all-new Fuso...