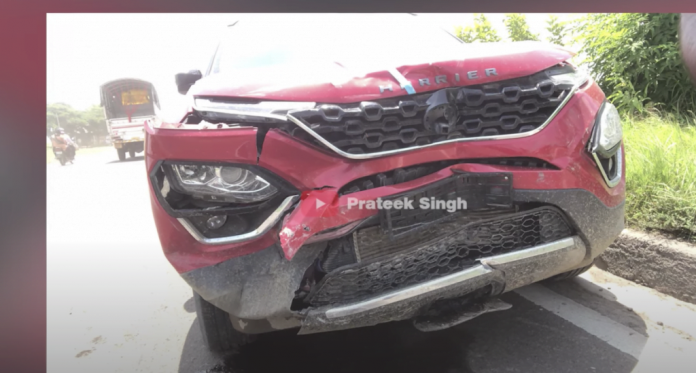 Here is an example of the strong build quality of Tata Harrier as here it had a head-on collision with a Mahindra pickup truck. See what happens to both of them.

Tata Harrier received a facelift towards the starting of the year which gave it a couple of cosmetic upgrades, new features and a boost in the power figures. Then we also saw the launch of Harrier AT, which now gets a 6-speed torque converter unit to go with its diesel engine. Its prices start at Rs 13.84 Lakhs up to Rs 20.10 Lakhs (ex-showroom).

Harrier is very popular among buyers primarily due to its strong build quality. Two Tata cars have received 5-star safety rating making them among the safest cars of India. Here is an example which shows the strong build quality of Tata Harrier. It went through a head-on-head collision with an overspeeding Mahindra pickup truck.

The owner was driving his facelifted Tata Harrier on Pune-Solapur highway at a speed of 80-100 km/hr. Suddenly, due to construction, it was made into a single patch road which had cars going and coming on the same lanes. After a couple of minutes, the owner saw an overspeeding pickup truck coming from the front.

While the Harrier came to an abrupt halt, the driver of the truck could not control and crashed. The owner did not sustain any injuries due to the strong build. It has received a significant damage only because of the bull bar installed on the pickup truck. The radiator, bonnet and front bumpers of Harrier have been damaged.

As for the pickup truck, its bull bar has managed to absorb the impact. The bumpers and front grille of the truck have been damaged and the impact has also reached the side fenders. Bull bars are a very strong protection that might degrade the look of a car but will keep it very safe. And the result of that, you can see over here.

Elderly man fatally hit by car on I-696 while retrieving grill...

One dead in rollover along Highway 1 near Langley