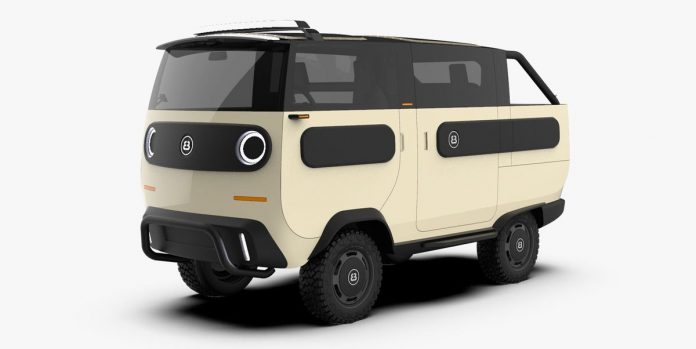 Electric vehicles have plenty of advantages over internal-combustion cars, but one of the least-appreciated might be their modularity. While there’s no getting around their need for hundreds and hundreds of pounds of batteries, said batteries can be arranged in flat configurations between the wheels, leaving all the space above them to be used in ways internal-combustion cars and their giant engines can’t match.

Still, we’ve never seen an EV that’s embraced that idea quite as enthusiastically as the ElectricBrands eBussy.

As the name might lead you to believe, the eBussy is, indeed, bus-like — albeit more in the Volkswagen sense than the mass transit one — in certain configurations. Thanks to the modular platform, the passenger and cargo areas can be outfitted in a wild array of ways: a van, a dump truck, a panel truck, a two- or four-door pickup (the latter also available in sweet cabriolet form), a camper van, and more — many of which are also available in off-road variants.

The eBussy lineup offers something for practically everyone…so long as you don’t need to get anywhere particularly quickly.

Granted, regardless of which version you choose, you won’t be going anywhere all that fast. There are four in-wheel motors, but they crank out a total of just 20 horsepower. The basic version comes with a 10-kWh battery that offers a claimed range of 124 miles, while an optional 30-kWh battery delivers a claimed 373 miles; given how optimistic European range estimates are for EVs, though, we’re guessing you’d see far less in the real world.

The eBussy manages to get away with such small batteries by being, well, very small. Technically speaking, it’s not actually a car; it’s a heavy quadricycle, in EU classification, which means it’s more like a side-by-side or quad than a regular van. Quadricycles are generally limited to about 28 miles per hour and the aforementioned 20 hp, and can’t weight more than 990 pounds in passenger-toting form (not including the weight of the batteries).

Still, if you can live with that, the eBussy presents a pretty compelling case for itself. Four-wheel steering and its tidy dimensions (it’s not even 12 feet long in basic form) mean maneuvering should be a snap, and those small batteries mean recharging is a breeze; the company says a EU-standard 230-volt plug should recharge the eBussy in 3-6 hours. Solar panels can serve up added range on the go, as well. (The company says it’ll also offer battery exchange stations.)

Granted, it seems highly unlikely that this little European plaything will ever make its way across the Pond —Americans aren’t exactly known for their love of tiny electric vehicles. But if it does, we’ll be first in line to take a crack at it.