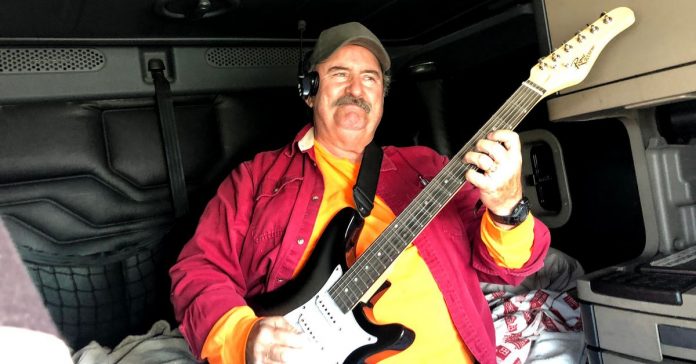 SALT LAKE CITY — Chris Hope is feeling guilty. Here the world is, going to rack and ruin, mired in a pandemic, the Dow in free fall, and yet, as far as his job is concerned, working conditions have never been better.

Chris is a long-haul truck driver. The nation’s highways are his office, and lately they have been so much easier to get around on.

”I don’t want it to get heavy again; I really enjoy the light traffic. But at the same time I feel guilty because I know there’s other people who don’t have the same financial stability that I have. My wife and I are OK, everything’s going to be fine because we’re working, my company’s not going to fold. But on the other hand there’s a lot of people suffering that need to get back to work.”

In the meantime, he has all the work he can handle, and all the time, too, now that the federal hours-of-service restrictions have been lifted to ensure supermarket shelves stay stocked, hospitals keep functioning and packages get delivered on time.

Suddenly, truck drivers are America’s new royalty. They’re the pandemic’s first responders — recipients of pats on the back, shoutouts and attaboys, as opposed to single-finger waves and people cutting them off.

On his way on I-80 from his home in Merced, California, to the Amazon warehouse in Salt Lake City west of the airport, Chris passed signs that read: “We Love Truckers” and “We Love You Guys.”

“People are seeing how critical trucking is,” says Chris. “They’re coming to understand that there’s people who make their life possible that they didn’t even notice before. I’m sorry it’s under such circumstances, and once the pandemic is over, I think that recognition will fade. But I appreciate my 15 seconds of stardom.”

At the moment, Chris is holed up at the Flying J Travel Center on 2100 South, waiting to pick up a fresh trailer in the morning that he will deliver to the Amazon facility in Seattle. Under normal conditions, he’d be inside at the Denny’s, having something to eat. But these aren’t normal times. Denny’s is closed, offering takeout only. Instead, Chris and his “truckin’ dog,” a Huskie named Jayla, are subsisting on convenience store coffee and the week’s supply of food he brought from home.

Chris, 63, acknowledges that stopping at truck stops these days carries a certain risk.

“I can only imagine that going into that truck stop is more exposure than anybody else is going to see, unless you go into a hospital,” he says. “I mean, just go around the parking lot and look at the license plates; they’re from all over. Everybody’s been pretty good at maintaining social distancing and a lot of people are wearing masks, but still.”

That’s the downside of trucking in the COVID-19 era. The upside: cruising through a country where 95% of the population is under lockdown orders.

All along his travels as he hauls freight for Orbit One Express, from Phoenix to Seattle and up and down California, it’s as if he’s landed in a “Mad Max” movie.

“It’s pretty strange. I drove through Carson City the other day in the evening. It’s a ghost town. I’ve driven through a lot of towns and they’re all closed.”

Tonight, he’ll take Jayla for her nightly walk, tune into a Zoom meeting with his fellow Jehovah’s Witnesses congregants, read his Bible, then play his electric guitar for a while before settling down for the night in the bed in the truck’s living quarters located directly behind the driver’s compartment.

Tomorrow morning, he’ll negotiate the approximate 2-foot commute to get to work, climb back in the driver’s seat, start up his rig, and — in this good news, bad news world he’s found himself in — head for the open road.

A nursing home in New York was forced to order a...