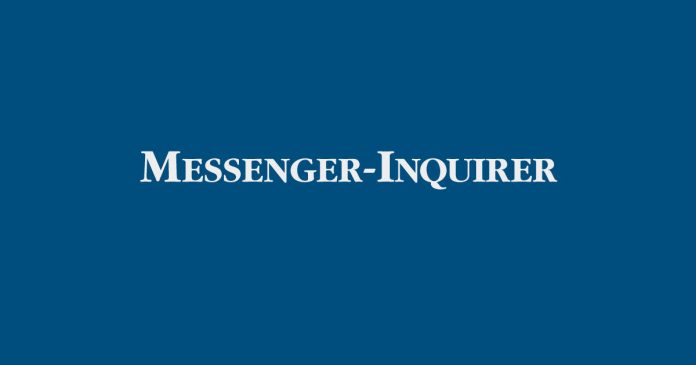 Mrs. Kate Coons has received an interesting letter from her son, Robert M. Coons, who was one of the American boys sent with the crew to bring back the R-38. He writes sitting in an airship of 10,000 feet over London, clad in a fur suit. He says there is nothing like flying at night time. He also says there are only seven Americans aboard and 30 English. All you can see is millions of lights below them as it is very dark and cold. He later flew over the English Channel and passed over some old battlefields around France and across Belgium, then back to England.

• June 8, 1920, according to C. N. Brey, he is having difficulty in getting a second wife, and was not entirely certain whether he would be able to use his license yesterday. Mrs. Bettie Walker, living near Whitesville, was forbidden by her three husky sons to be in courtship with Mr. Brey. Brey is trying to devise some means to steal his bride to be, and if this fails, he may resort to legal action to procure his bride.

• June 9, the management of the 14 Star Cash groceries, which have been the victims of robberies during the past few months, offered a reward of $100 to anyone who will furnish information leading to the arrest of the thieves who have been breaking into the local stores and homes. Almost every one of the Star groceries has been robbed during the last few months. In at least two instances, heavy safes have been carried away. On one occasion, the loot was so large that it was thought a two-ton truck must have been used.

• June 10, the enthusiasm which prevailed at the meeting held at West Louisville was attended by nearly a hundred persons from that community practically assured the building of a high school there this year. Superintendent Graham announced that if the people of the West Louisville community will raise $3,000 toward building the school the county board of education will provide the rest of the amount needed. It is thought there will be 40 students assured for the first year.

• June 11, Miss Sarah Lee Baker, general secretary for the Welfare League, is spending some time in the country looking after the welfare of clients. Two patients were found to be self-supporting and getting along with prospects for good crops. Two tuberculosis cases were found, which were reported to the county health clinic — one young woman, and the other a mother with a number of children. One young girl who is ambitious for education will have an opportunity this fall as assistance will be given her mother.

• June 12, word was received from Drakesboro that Sheriff Lyle of Muhlenberg County had notified cashier Hanagan of the Citizens Bank of Drakesboro that three of the supposed bank bandits had been arrested in Bowling Green and were in jail. Two other men thought to have been implicated in the robbery are still at large. The men were arrested after they had been trailed from Drakesboro to Russellville to Bowling Green. They had about $300 in cash, Liberty Bonds and other securities.

• June 8, 1970, Dr. J. William Douglas, chairman of the department of health and physical education at Kentucky Wesleyan College, will be guest speaker at the luncheon in Gabe’s Rapallo Room that will close the year for the General Evan Shelby Chapter, Daughters of the American Revolution. “Flags of the United States” will be the topic of the address that will follow the meal. A native of West Virginia, Douglas received the Ph.D degree last spring from Ohio State University. He has taken post graduate work at Michigan State University.

• June 9, Regatta Week gets under way in Owensboro with officials anticipating a large turnout for all the events, with the week being capped off by an expected crowd of 50,000 or more on Race Day. It all begins at 7 p.m. tomorrow with the Regatta Parade, described by officials as “second only to the annual Christmas parade in size and splendor.” The parade will consist of 40 units, featuring as many as 10 hydroplanes and their trucks. There will be four marching bands and the parade will also feature the new Daviess County dairy princess who will be crowned tonight.

• June 10, Major Archie B. Clark, Jr., has received his second through seventh awards of the Air Medal for air action in Southeast Asia. Major Clark, a flying safety officer, was decorated for his outstanding airmanship and courage on successful and important missions completed under the hazardous conditions while assigned to Nakhon Phanom Royal Thai Air Force Base, Thailand. The major was presented the medals at Craig Air Force Base where he now serves with the 3615th Pilot Training Wing. His family lives in Owensboro.

• June 11, “Landscape,” a pencil sketch by Glenn Puckett, a member of the Cliff Hagan Boys Club, received first place honors in the recent National Boys Club of America Fine Arts Exhibit, which was held in Boston and will appear in a special Boys Club of America Fine Arts and Photography exhibit. It was entered in the local art exhibit in February and Glenn received honors in charcoal, pencil or pen and ink division.

Convoy for Erb Group founder scheduled for May 1 – Truck...