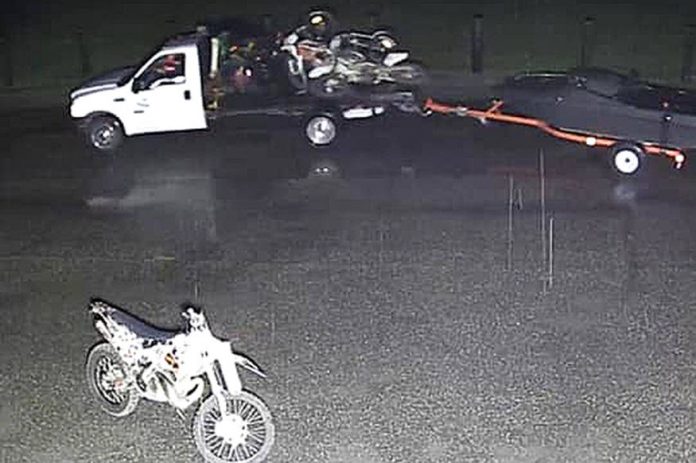 Several thefts over the weekend have stung locals and businesses.

A flatdeck truck was pictured on surveillance, loaded with recreational toys, and hauling a custom speedboat from Coldstream Sunday, June 14.

Kopp talked to someone on Sunday who said they say the jet boat heading past Scotch Creek towards Seymour Arm.

“It sounds like the truck may have been switched out in Armstrong,” said Kopp.

The truck was involved in a chase near Vernon later on Sunday.

“The cops had a high speed chase after him but let him go for public safety,” said Klopp.

Meanwhile the truck used in the theft is believed to have been stolen June 8 in West Kelowna.

“This is definitely our F350 flatdeck. Our logo is on the door,” said Karen Walker Verge, who had two similar trucks stolen last week.

The truck was also spotted at Electricfatbike Company Sunday morning, where seven bikes were stolen among other items.

“Please forward any information regarding any of these items directly to the police or me,” EFB Company said on Facebook, adding that there is a $3,000 reward for information leading to finding the thief.

Just prior to these incidents, another business was victim to a major theft June 14 around 1 a.m..

Gilbert Supply Company (Bumper to Bumper) in Vernon was broken into and some Milwaukee tools were stolen.

“The guy knew exactly what he was doing and where to go, making us think he has been in the store a few times,” Tage Gilbert posted on Facebook.

This truck was spotted on camera outside Gilbert Supply Company in Vernon, where a number of tools were stolen June 14. (Submitted Photo)

Truck driver slams protesters who beat him unconscious when he stopped...