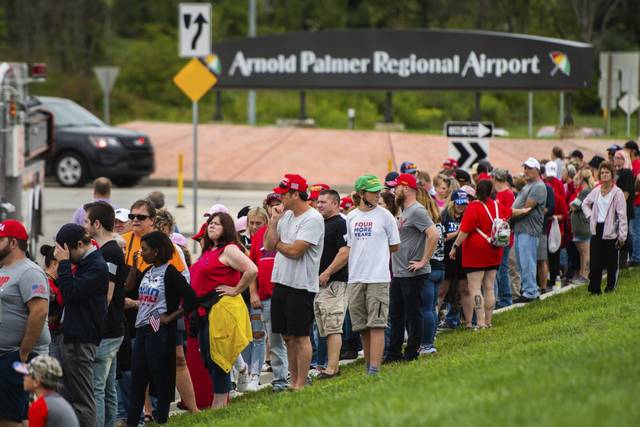 TribLIVE’s Daily and Weekly email newsletters deliver the news you want and information you need, right to your inbox.

Traffic was backed up for miles on the roads approaching Arnold Palmer Regional Airport on Thursday evening as thousands of Trump supporters turned out for the president’s campaign appearance near Latrobe.

The president spoke in a hangar at L.J. Aviation, at the airport in Unity, but a viewing screen was set up outside for the overflow crowd. Many parked along roads and hiked to the airport grounds.

“This is like Woodstock. People are abandoning their vehicles and walking in,” said Dan Shellhammer, 60, of Apollo.

Jennifer Mains, a Latrobe native now living in Indiana County, brought her sons, Joseph, 12, and Domenic, 9, to witness what she considers an historic event in a year that already has entered the history books because of the lives lost to the coronavirus pandemic.

“I wanted them to have the opportunity to see President Trump and listen to his words in person,” Mains said.

While opponents have criticized the president’s response to the pandemic, Mains maintains, “It’s not Trump that’s mishandling it, it’s our Democratic governor. We need things opened back up, the economy back, people working and our kids in school.”

To counter the campaign event, progressive advocacy group MoveOn Political Action sponsored a truck displaying electronic billboards characterizing the president’s response to the pandemic as a failure. Referencing a saying from Latrobe native and children’s television host Fred Rogers, one of the signs asked, “What do you do with the mad you feel?” and provided an answer: “Vote Trump out.”

“This pandemic has fundamentally changed our society, from daily life to public opinion,” MoveOn Executive Director Rahna Epting said in a statement. “We need a president who will reflect those changes, instead of someone who has built an entire platform on living in the past.”

“You’ve got a lot of nerve,” a roadside Trump supporter commented as the truck drove along Route 981 near the airport entrance.

“I think this is the silent majority speaking up,” said Cathi Bufalini, 57, of Greensburg as she joined others waiting to enter L.J. Aviation in a long line snaking through the airport parking lot. “We thought we were going to get inside (the hangar), but we may not be.

Bufalini parked at the Big Lots store, close to Route 30, and walked to the airport.

“I think it’s totally worth it,” she said. “I never saw a president up close and personal. I just love the policies President Trump runs on, and so I’m here to support him.”

Though the president’s appearance wasn’t scheduled until 7 p.m., some supporters arrived before sunrise and braved heavy bursts of rain during the day. Some were wearing required face masks and were told they would have their temperatures taken as they funneled through a gate outside the hangar.

Matthew O’Grady, 24, traveled from Pittsburgh’s South Hills to see the president. He said he hoped to hear the president focus on his administration’s policies.

“I think he’s been going after Joe (Biden) a lot,” O’Grady said. “I’d like to hear more policy as we’re approaching the election. It’s about America first. We’re in really strange times right now. People are out of work — that’s number one.”

Pat Donnelly, 58, of Penn Township said he came to the event to support Trump because “he’s the man that’s for the people, not the politicians.” Donnelly cited the economy and energy independence as important issues in the campaign.

His friend Jill DeNillo, 53, of Hempfield, said she plans to vote for Trump to remain in the White House because she sees him as a strong supporter of the military. She noted she has a son, a Navy ensign, who will be stationed at Pearl Harbor.

Trump did focus on jobs in his speech and attacked Biden on energy.

TribLIVE’s Daily and Weekly email newsletters deliver the news you want and information you need, right to your inbox.