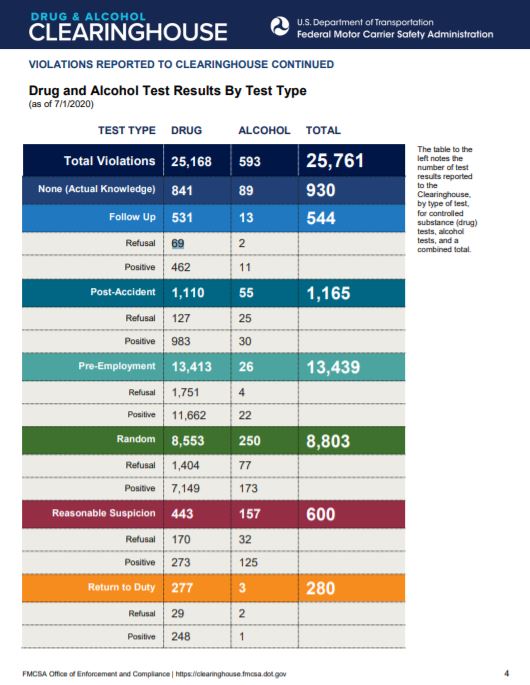 WASHINGTON, D.C. – The U.S. Federal Motor Carrier Safety Administration (FMCSA) has revealed that thousands of commercial vehicle drivers have refused to take the tests for controlled substances since the Drug and Alcohol Clearinghouse went online in January.

In its monthly summary report, the agency said, as of July 1, nearly 3,700 drivers had refused tests. It said 95% of the refusals related to drug tests.

It is the first time the agency has added testing refusal data to its monthly report.

Employers are required to conduct queries in the Clearinghouse when hiring a new commercial driver, and annually for all drivers they employ.

The agency said there was a surge in such queries in June, which reflected renewed business activity following Covid-19 related closures in March, April and May.

In all, the FMCSA said, the Clearinghouse received 1,106.498 queries since its launch. It also reported 25,761 violations.

Since March, the agency has issued a number of waivers on drug and alcohol testing to ease the burden of truck drivers navigating through the pandemic.

The waivers will be effective until Sept. 30.

Driver dies at hospital after pickup truck falls into pond in...