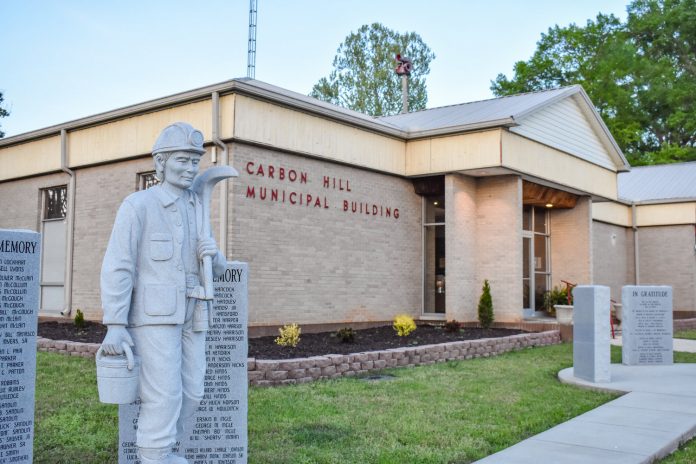 CARBON HILL – After a year of upheaval over the comments of its former mayor and after revelations of financial mismanagement, Carbon Hill is now settling down to decide who among three candidates it wants to lead the city in the future.

April Kennedy Herron, then the District 3 councilwoman in her first term, was appointed mayor on July  1 shortly after the resignation of Mark Chambers following incidents last year and this year on Facebook that caused headlines. A former city clerk is also no longer with the city, and the council discovered recently checks, audits and even mail was neglected at City Hall for years.

A native of the city, Herron was a pool director for the city in 2015 and has been secretary for the band boosters. On her term on the council, she only missed four meetings.

Herron, 41, has a husband, Jeremy, and Herron has mostly been a stay-at-home mother. Her stepdaughter is Courtney, 24, and her children is Payton, who turns 17 next month, and Airelle, 21.

She is running for a full term now as she sees areas where she can be of service in. “I’ve gotten a lot of things started and I would like to see it through to the end,” she said. “I want to bring this town to a better point where it is cleaner.  We can get some of these abandoned houses cleaned up ” and the finances made stable.

Herron noted her “main goal” is to get the city back into good financial shape. “When (former Mayor) Phillip Howard left office, we were good. We can get there again with the right leadership,” she said.

Dexter “Pig” Dozier, Sr., 56, has lived in Carbon Hill 40 years. He went to school at Hubbertville, quitting school to go to work when he was 16. “I’ve never been without a job,” he said.

Dozier – who is now recuperating after a bout with COVID-19 – said in a phone interview Thursday he went to work at the Carbon Hill Manufacturing for a while, and then worked at a manufactured housing plant. He has been in the car selling business for more than three decades. He worked at Waldrop Motors for a number of years, and started Poor Boy Auto in Carbon Hill for 11 years, which he still runs.

He has four adult children and a nine grandchildren, and has a wife, Christy.

“I just want to make the town a better place for my grandkids. It has gone down pretty bad in the past few years,” he said.

Former Councilman Billie D. Jenkins, 73, was born in Carbon Hill but the family moved; he graduated from Walker County High School in 1965. He served in the Army and wound up in Nashville for 15 years in the largest diesel fuel injection business in the nation, building fuel injection pumps for vehicles. He went into business for himself in 1984 and still does that work today after 55 years.

Tired of Nashville’s traffic, he moved back to Carbon Hill in 2005. He has two grown sons – one who lives with him, Billie E. Jenkins, and Patrick Scott Jenkins, who lives about 10 miles away.

Jenkins was appointed to fill an unexpired term on the council after Terry Mason’s resignation.

“I think I can help the city get back on their finances,” he said, adding people are also complaining about the police and garbage. He wants a new sideloading automatic garbage truck. “I guess we’re the only people in Walker County who have people who ride on the back of a garbage truck,” he said.  Jenkins said he brought up the idea during his one term on the council six years ago “and they shot it down.”

Nikola Motor: Taking trucks out of the carbon equation