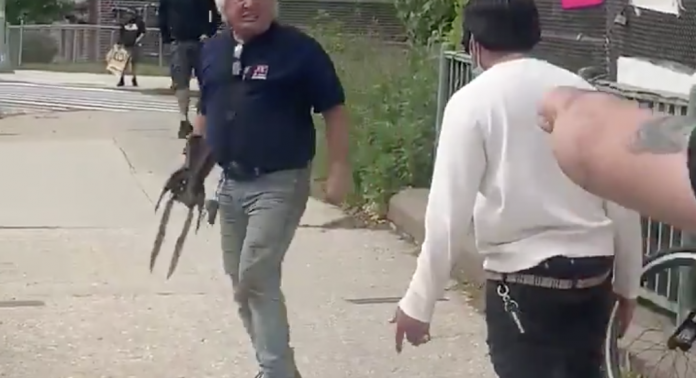 Three men have been arrested for three separate incidents of assaulting protesters at Black Lives Matter demonstrations that were all filmed and shared widely online.

Queens District Attorney Melinda Katz announced that Frank Cavalluzzi, 54, of Whitestone was charged with second-degree attempted murder after he was filmed yelling “I will kill you,” and then swinging a four-bladed weapon at a small group of BLM protesters standing on an overpass of the Cross Island Parkway Tuesday, then driving his SUV onto the sidewalk where they were standing. Katz described his weapon as “a glove infused with 4 long, serrated-edged blades.”

Cavalluzzi surrendered to the 109th Precinct Thursday morning and was arraigned the same day. He was also charged with first and second-degree attempted assault, first-degree reckless endangerment, second-degree menacing, endangering the welfare of a child, and fourth-degree criminal possession of a weapon. His bail was set at $100,000 and he’s due back in court on July 2nd. Cavalluzzi faces up to 25 years in prison.

“In a burst of anger and rage, this defendant allegedly sought to kill protesters who were peacefully assembled and exercising their right to free speech,” Katz said in a release. She added, “It is amazing that no one was injured in the melee.”

In a separate incident, another man was arrested, accused of nearly running over three teenagers protesting in West Babylon on Long Island.

Suffolk County police declined to release the name of the accused, and did not answer questions on why his identity was not released.

A 16-year-old who was at the protest told ABC 7 that she and two friends were standing outside of a 7-11 holding BLM signs on Tuesday evening when a man driving a large truck into the store’s parking lot began confronting them.

“He gets out and starts screaming, ‘White lives matter. You don’t belong here. Get out of my neighborhood,'” Scarlet Lara, 16, told ABC 7. When the man left the store, he pulled the truck up next to them to continue yelling.

“Then we said, ‘All lives don’t matter, until black lives matter’ and that’s what got him really mad and he got in his car and he started driving towards us,” Aiyannah Antoine, 18, told ABC 7, describing the truck lunging forward onto the curb where they were standing.

The Suffolk County Police Department report read that “a man driving a truck veered the vehicle towards her [Lara], forcing her to move out of the way.” Video of the scene shows Lara running away from a large white truck with a blue stripe that drives over the curb towards her. The third member of the group, 17-year-old Kaila Espinal, posted the video on her Snapchat account.

The unidentified driver was arrested Friday and charged with reckless endangerment and endangering the welfare of a child.

A Maryland bicyclist who was filmed aggressively ripping BLM flyers and tape out of the hands of young protesters, then ramming his bike into one of them, turned himself to police Friday after internet commenters misidentified at least two other men as the perpetrator.

Police said Anthony Brennan III of Kensington, Maryland was biking on the Capital Crescent Trail in Montgomery County on Monday when he came across a trio of young people — ages 18 and 19 — posting flyers in memory of George Floyd.

In a video of the incident, he ripped the flyers out of one woman’s hands, and grabbed a roll of tape off the arm of another woman while a man filmed the incident.

He then grabbed his bicycle and aggressively pursues the man filming, who drops his phone into the grass while yelling in surprise. The man said Brennan ran the bicycle into him and pinned him to the ground, according to NBC 4 Washington.

“He pretty much screamed at us. He was saying, ‘F— you. You guys [are] inciting riots.’ He kept saying we’re ‘deviants.’ I’m not sure exactly what he meant by that,” the man who was filming told NBC 4 Washington.

As video of the assault circulated online, at least two men said they were misidentified as the cyclist during the search to identify Brennan, prompting Maryland’s Attorney General Brian Frosh to ask the public to not “name individuals & risk harm to innocent people.”

👉UPDATE: Thanks for the great response. Park Police have a strong suspect as a result. But, please don’t name individuals & risk harm to innocent people. Please share further info with Det. Lopez @ 301-929-2774.

Brennan’s own neighbors tipped off officials to investigate him, according to WTOP.

“I am sick with remorse for the pain and fear I caused the victims on the trail, and online,” Brennan’s statement said. “I am cooperating fully with authorities. I am committed to making amends by addressing, through counseling, the underlying issues that led to my abhorrent behavior.”

Brennan has been charged with three counts of second-degree assault. WTOP reports he was was released Saturday on a $5,000 unsecured personal bond.