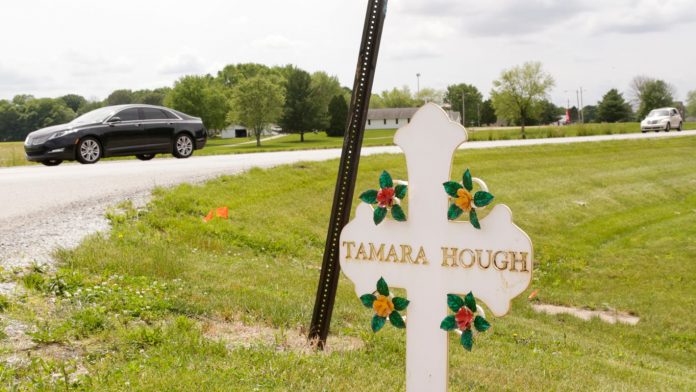 LAFAYETTE — Those who know the dangers of U.S. 231 and Tippecanoe County Road 800 South and Indiana 26 and County Road 900 East will be happy to know that traffic lights are being installed this summer.

Not as dangerous, according to traffic stats from the Tippecanoe County Area Plan Commission, is Indiana 28 and U.S. 231. But it is more congested with traffic, according to those who live and drive there.

The light is being installed at Indiana 28 and U.S. 231 in Romney because traffic can be heavy at times during the day, as well as during events at Purdue University, Indiana Department of Transportation spokesman Scott Manning said. It’s also a detour for Interstate 65 if it has to be closed, as it was for a month in early August 2015.

The light at Indiana 28 and U.S. 231 came as welcome news to people who live and work in the area.

“They needed to put that light up for years,” Amber Darling said.

She lives along U.S. 231 and can see her house from the Dollar General store where she works. But on Thursday morning — as with most mornings — congested traffic through tiny Romney meant a five-minute drive to work, she said.

“You’ve got truck drivers coming through,” Darling said. “You’ve got kids crossing the street, people pulling out at the gas station.

“There’s been a few accidents up here. Like last year, one lady got in a bad one.

“(The traffic light) needs to be up, or someone’s going to get hurt.”

At nearby Camila’s Cafe, next to the Friendly Market gas station, Vicente Magallanes is familiar with both of the intersections on U.S. 231 that are getting traffic lights. He owns the restaurant and sees the traffic.

“I think it’s needed in both places,” he said. “We opened a year ago, and I’ve seen (traffic accidents) twice. … One was really, really bad.”

The Romney intersection had the fewest number of crashes that year. Three of the four accidents were because the driver didn’t stop in time. Two of the crashes caused injuries, and four were just property damage, according to the plan commission stats.

The most treacherous of the three was the intersection at U.S. 231 and County Road 800 South.

In 2018, 13 crashes were reported there. Four were personal injury crashes.

Two of the 13 crashes were because someone ran the flashing stop light and two were because the driver didn’t get stopped in time to avoid the collision, according to the county’s stats.

In that crash, an eastbound pickup truck didn’t stop and drove into the path of a northbound semi on U.S. 231. The force of the collision snapped the pickup truck in two.

At Indiana 26 and County Road 900 East, the plan commission’s 2018 stats showed eight crashes at that intersection. Only three involved injury.

However, the Journal & Courier reported on an April 30, 2019, fatal crash there. News reports indicate that the northbound SUV on County Road 900 East did not stop at the intersection.

A memorial for Tamara Hough, who was killed in a crash in April of 2019, is placed at the intersection of Indiana 26 and Tippecanoe County Road 900 East, Thursday, June 4, 2020 in Lafayette. (Photo: Nikos Frazier | Journal & Courier)

Back in Romney in southern Tippecanoe County, the speed limit on U.S. 231 goes from 55 mph to 30 mph at the northern cusp of the small town in the intersection of the state and federal highways. Apparently, it’s either easy to miss the slower speed limit or it’s often ignored.

“I feel a lot of people don’t respect the speed limit,” Christina Olivo of Camila’s Café said, as she took a quick break from her work.

“You can see right now the cars are just flying by and the speed limit is 30 (mph),” she said, nodding at the front windows of the café as a pickup truck pulling a travel trailer speeds south on U.S. 231, clearly not doing 30 mph.

“All the traffic in this town and up and down this road, it used to be nothing,” Darling said. “Now it’s a main road. … They need a few more precautions.”

Manning said the stoplights will be installed this summer, starting as early as this week.

The traffic lights will all be operating before the end of August, he said.

Food trucks get creative to keep moving during pandemic