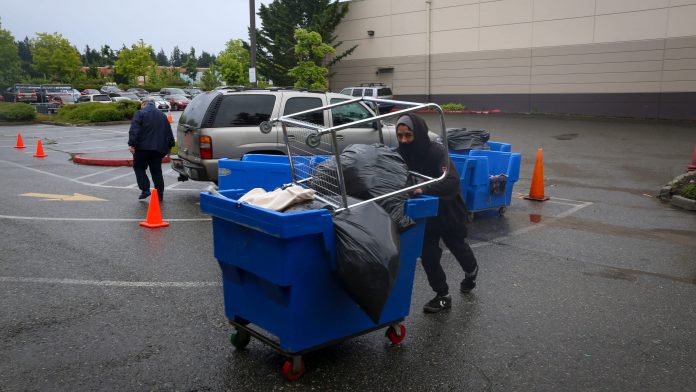 A Silverdale Goodwill employee pushes a cart full of donated items back into the store to be sorted on Friday. (Photo: Jessie Darland / Kitsap Sun)

Employees were directing non-stop traffic around the Silverdale Goodwill on Friday. Those with cars full of items to donate waited in line for 30 to 40 minutes to get rid of their stuff. The line of 30 or more cars wrapped through the parking lot and around the building.

Eric Moe, Silverdale Goodwill manager, said it’s been like this since opening back up.

The traffic controllers are helping customers avoid causing backups for nearby businesses like Bed Bath & Beyond or Trader Joe’s. Moe said most bringing items are understanding of the long wait time to drop off donations.

People even come to wait in line an hour or so before opening. Moe said there were about 40 cars waiting when they opened for donations at 9 a.m.

“Then we were closed so I think that demand was already pent up,” she said. “Then people were in their houses looking at stuff they didn’t want to look at anymore.”

The Silverdale Goodwill opened on June 4 and accepts donations from 9 a.m. until 3 p.m. But if the line is long, people may be turned away at 2:30.

A lineup of cars filled with items for donation wraps around the Goodwill in Silverdale on Friday. Goodwill manager Eric Moe said there are often 30-40 cars waiting in line at once. (Photo: Jessie Darland / Kitsap Sun)

Clothes, shoes and kitchen items are some of the most commonly donated items. The store isn’t accepting furniture at the moment to avoid becoming too over-crowded.

The person donating items waits in his or her car until being directed to pull forward where blue plastic carts wait to be filled. They get out and toss their unwanted items in the carts, which employees pull in and sort through.

Customer Brian Soete brought several large paintings and a few plastic tubs filled with items to donate after cleaning his home out during Washington state’s stay-at-home order. Items were collecting in Claudia McDonald’s home, but then Goodwill wasn’t open for a while to donate.

Marge Masla waited 40 minutes in line Friday to donate clothes, bedding, books and electronics. She had a few furniture items, but those were turned away for now. She said she’s had a lot of time to clean this year.

“With COVID, everybody cleaned their house,” she said. “And I love donating and I love shopping.”

Goodwill employees wear what Moe calls a “Ghostbuster backpack” and spray an antiviral on the donated items. The items sit with the antiviral for two days to two weeks due to the amount of inventory the store is getting. McKenzie said this has also caused a bit of a space issue.

“For some, that’s their livelihood; thrift and look for those diamonds in the rough to sell and make money,” he said “So they’re very happy we’re open because we were closed for 77 days.”

Claudia McDonald tosses a basket and other items she no longer wants into bins at Goodwill in Silverdale. She said items have been collecting in her home over time, but she wasn’t able to donate recently because of COVID-19 closures. (Photo: Jessie Darland / Kitsap Sun)

In preparation for reopening, Goodwill had sneeze guards installed. Restrooms are cleaned often and thoroughly, and carts are disinfected after each use. There’s also hand sanitizer available and the now-common 6-foot markers to promote social distancing. Fitting rooms aren’t open yet, and jewelry can’t be tried on. There are also no returns allowed for now, Moe said.

Habitat for Humanity in Bremerton is dealing with a boom of donations as well.

He said donations are up about 20% from normal and employees are trying to price items so they can move faster.

St. Vincent De Paul in Port Orchard isn’t taking donations until Monday. Sean Jeu, director of operations, said sales were declining before the shutdown, but donations were still coming in.

“The only way we can push out the incoming donations is if we have the sales,” Jeu said. The store was becoming full of items that weren’t being sold, and when St. Vincent reopened June 8, there wasn’t more room for donated items.

Last week, employees processed items and put them on the sales floor.

Jeu says now the store is ready, and he expects to see quite a few donations on Monday. In the past, when the store has been filled with donations, limits have been put on the number of items people can bring, which may have to happen again, he said.

“We’re blessed to have a community that believes in what we do,” Jeu said. “We get so much stuff in, that’s the reason why our prices are always so reasonable because of that.”

22-Year-Old Killed In Crash Between Pickup Truck, Motorcycle In Dutchess

Nikola posts US$86.6 million loss, but makes progress towards production –...