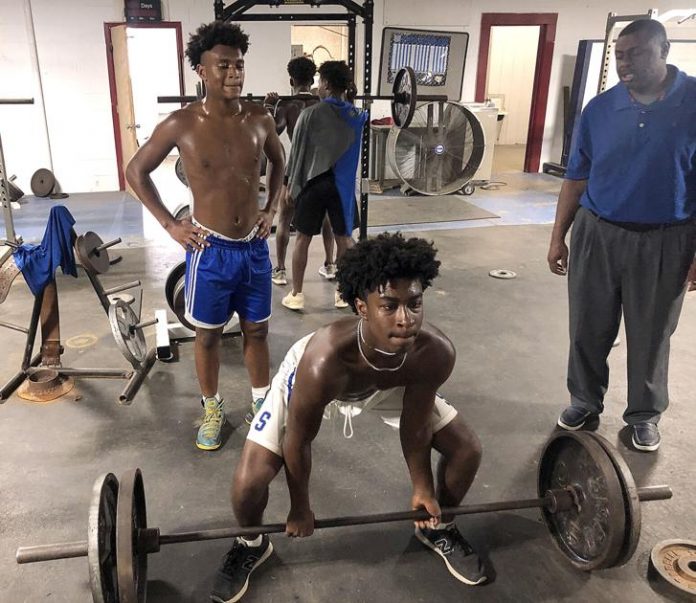 Players getting to and from practice is often taken for granted by fans, but Southeast Lauderdale head football coach Calvin Hampton said it’s sometimes a bigger challenge than people think.

That’s especially true during the COVID-19 pandemic when the Tigers players were kept away from the school’s campus for months before being allowed to return to on-site workouts in early June. Having players unable to do team activities for months leads to a greater possibility of attrition, which is why Hampton is grateful for players like senior Roman Hudnall.

It’s not uncommon for Hudnall to pull up to practice in his white pickup truck with as many as eight teammates, which Hampton said is a reflection of his senior’s leadership capabilities. It’s leadership his team will need this fall, Hampton stressed.

“Accountability — he’s trying to take care of everybody and make sure they know where they’re supposed to be,” Hampton said. “You see a bunch of guys get in the back of the truck, and he’s making sure they get home. Doing things like that, that’s just showing me that he’s showing an unselfish concern for his teammates.”

The coronavirus shutdowns left Hudnall frustrated that he could only do individual workouts at home, which is why he made a point this summer to go the extra mile, literally, to get some of his teammates to practice once summer workouts began last month.

“It kind of started this year because I didn’t have a truck last year,” Hudnall explained. “I’ve been bored at home, so I’ve been trying to put the work in, especially since it’s my last year (of high school football).”

Fellow senior Tyler Griffin said he sometimes catches rides with Hudnall, though he insists on sitting in the cab rather than the bed.

“The wind will hit me a little too hard sometimes,” Griffin joked.

Senior Chris Mosley said he’s a little more open to sitting in the bed if he happens to catch a ride from Hudnall, and he appreciates what his fellow upperclassman is trying to do by making sure his teammates make it to workouts.

“If you get 10 players to come, then he’s put all of them before himself,” Mosley said. “Everyone has to get with the same grind.”

It’s not too much trouble either, Hudnall insists.

“Most of them stay down the road, so it’s not hectic, especially since I’m not on the highway or interstate,” Hudnall said.

For Hampton, there’s an added comfort level with having Hudnall pick up his teammates.

“It’s important for us,” Hampton said. “I have plenty of guys who ride with their teammates and stuff like that, but it’s just something to see a truckload of guys all pull up like they’re living in the ’60s. I don’t have to worry about kids missing because I know if they’re not in the back of Roman’s truck, then they weren’t at home.”

The Tigers went 3-8 last season, and Hudnall said he’s trying to step up as a leader in hopes of it leading to a better year this fall.

It helps that he and the other seniors have a strong bond, and Griffin said that bond goes beyond football.

“They’re my brothers,” Griffin said. “Whatever you think a brother’s bond is supposed to be, that’s what it is with them.”

Mosley said that brotherhood is needed when both football and everyday life gets tough.

“It means more than football, but on the field I can depend on them to pick me up if I’m down on the field or down in general,” Mosley said.

Hudnall, Mosley and Griffin all said they want their final season at Southeast Lauderdale to be special. Griffin was specific when describing what “special” would entail.

“Something Southeast hasn’t done in a few years: a deep playoff run,” Griffin said. “That’s what I want.”