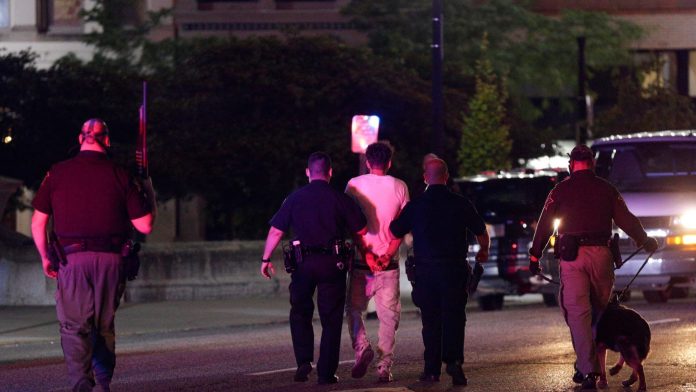 LAFAYETTE, Ind. — Tips from the public resulted in police identifying protesters they suspect of damaging the Tippecanoe County Courthouse during the late May 31 gathering, Tippecanoe County Sheriff Bob Goldsmith said.

Those cases are being reviewed by the Tippecanoe County Prosecutor’s Office for possible charges, Goldsmith said.

Protesters gathers May 31 around the courthouse and Lafayette City Hall to protest police brutality and the May 25 death of George Floyd, who was in custody of Minneapolis police officers when he died.

During the protests, someone spray painted the limestone walls of the 19th-century building on the Columbia Street side of the courthouse, while others threw rocks or bricks, breaking the glass of some doors and windows.

Police suspect Robert Lee Perkins, 34, of Lafayette, threw an explosive device during the protest. It exploded in front of the Columbia Street entrance.

Perkins was arrested June 5 on suspicion of rioting with a deadly weapon and arson. As of Tuesday, Perkins has not been charged.

Someone in the crowd fired a bullet into the third-floor window, narrowly missing a deputy who was posted on the balcony outside of the courthouse. Goldsmith said they have not yet developed leads on who fired the shot.

This was the scene Sunday, May 31, 2020, as protesters threw rocks, pavers and an explosive at the Tippecanoe County Courthouse as a rally to protest police brutality turned to chaos.

Police used tear gas and pepper spray to rout the protesters late May 31.

Four people have been charged from the May 31 protests.

Lafayette police are investigating the looting at Best Buys at the Tippecanoe Mall, Verizon on Promenade Parkway, the east side Walmart and the Tower Liquor Store at Creasy and McCarty lanes.

On the evening of June 1, more protesters assembled at the courthouse, resulting in five more people being formally charged.

On June 22, police released surveillance videos from the four stores asking the public for help identifying the looting suspects.

Police said Tuesday that they have leads on the people’s identity, but there are no new arrests yet.