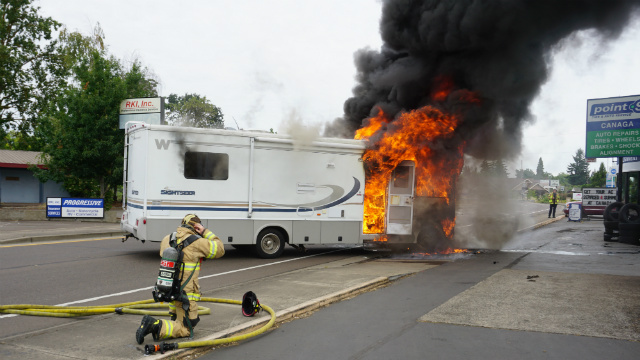 The Lebanon Fire District said a husband and wife brought their 30-foot 2004 Winnebago Sightseer into the service area of Canaga Point S Tires, 1179 Park Street, for a scheduled oil change.

Employees soon noticed smoke coming from the right front wheel well and engine compartment. Attempts to put the fire out were unsuccessful.

They hooked the RV up to a Point S service truck to pull it out of the service bay and onto Park Street about 20 feet from the building.

The fire quickly spread to the interior, and the smoke and flames threatened the nearby business, the district said.

Firefighters arrived and knocked down the fire, protecting the tire store.

Investigators said the fire was likely caused by animals nesting in the engine compartment.

The RV had not been used in several years, and the owner said he was preparing for an upcoming trip.

The district thanked the employees for their quick thinking to prevent the fire from spreading to the tire shop.

No one was injured.