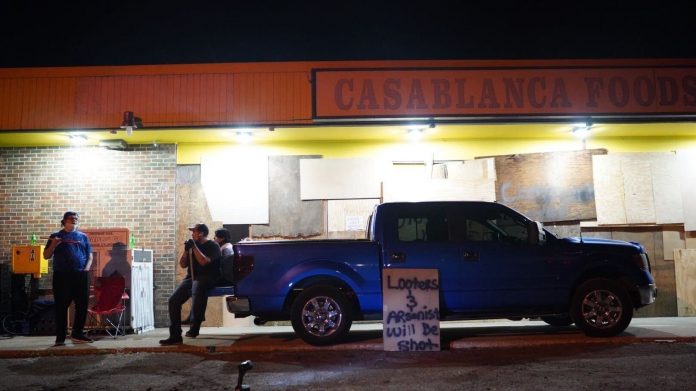 After days of watching their city burn, frightened and angry Minneapolis residents mobilized Saturday night to protect their neighborhoods, setting up shifts to watch over their blocks or barricading their streets to keep out troublemakers. Others patrolled neighborhood businesses, armed and ready to fight off arsonists or looters.

I’ve been driving around south Minneapolis, and in many neighborhoods things are quiet but watchful. On some streets neighbors are chatting, there are front yard campfires and people are out on their front porch. Homes are brightly lit.

In front of Casablanca Foods on Nicollet Avenue, a group of community members parked a truck in of the store, with a sign that said, “Looters & arsonists will be shot.”

Rich Johnson said he was guarding the store because “it’s one of the only stores still open in this area that isn’t burned down or damaged.”

“There’s a lot of people that live here that use this store that need it, that rely on it, they don’t have vehicles to go, Metro Transit shut down, they can’t go to another city to get their food, this is it,” Johnson said.

BREAKING: Somali shoppers chase away a group of white men who allegedly tried to burn stores at the Karmel Mall in south Minneapolis.

Others confronted protesters in their neighborhoods, telling them to move on. (Warning: Graphic language in the video below)

Protestors having Intense confusion about which way to go, greeted by group of people with bats and clubs pointing away, yelling To get F out of our neighborhood. Say they are Protecting their homes. 26th and Longfellow pic.twitter.com/AZ2kPVEiZZ

Earlier Saturday, Minneapolis Mayor Jacob Frey was asked whether he had failed Minneapolis, as many felt they had to take it upon themselves to defend their homes and businesses.

“We have done everything possible for Minneapolis thus far and what was very clear very early on is that the math simply didn’t work,” he said at a news conference with Gov. Tim Walz and St. Paul Mayor Melvin Carter. “This wasn’t a matter of lack of planning or poor strategy, we simply did not have the numbers in our police department to respond to groups of 100-plus people at a time in many different locations all throughout the city looting and burning. So we made the aggressive move to ask for the National Guard on Wednesday.”

With the guard’s help and the willingness of many to heed an 8 p.m. curfew, law enforcement were able to help restore some order in the Twin Cities overnight.

Car Doctor: More oil is better for the truck – Lifestyle...