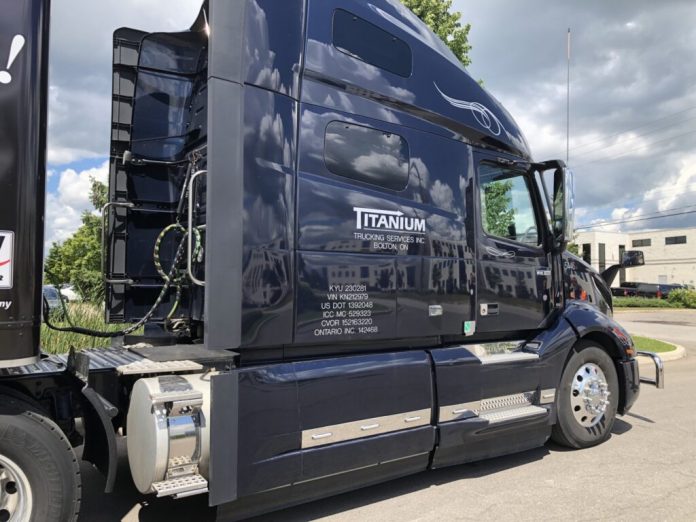 BOLTON, Ont. – Titanium Transportation grew its profit by $400,000 in the second quarter year-over-year, after weathering the storm brought on by Covid-19.

“We were able to respond quickly and decisively, early in the quarter, to ensure the safety of our workforce and customers. Capitalizing on our investments in technology and infrastructure built over time, our dedicated team members were able to deliver an unwavering high level of service, which our customers have come to expect, despite the economic backdrop. Our operating discipline and cost-saving initiatives allowed us to fully absorb the additional operating costs related to Covid-19 while once again able to generate positive free cash flow and reduce our indebtedness during the quarter. As such, the strength of our balance sheet positions us to not only execute on our organic growth strategy, but also allows for potentially larger, more accretive M&A opportunities.”

Truck transportation revenue fell 14.7%, while logistics saw only a 1.6% decline.

Titanium reported freight volumes bounced back in June and July to levels exceeding those two months in 2019. But, added Daniel, “The pricing environment hasn’t returned to levels that were comparable to the last four to five years.”

The spot market is strengthening, pointing to a stronger second half. Daniel noted there is still excess capacity in the Canadian market, but he expects the coming electronic logging device (ELD) mandate in June 2021 to squeeze some of that capacity from the market.

“We saw in the U.S. the effects of ELDs a month or two ahead of (implementation). I think that’s going to be a pretty major factor over the next six to 12 months,” he said.

Deal-making in the age of Covid

Titanium continues to be on the hunt for a sizeable, “transformational” acquisition, but some discussions have been put on hold as the federal Canadian Emergency Wage Subsidy has helped keep some struggling fleets afloat. Daniel said some of those prospective sellers have taken a wait-and-see approach to selling, thanks to the government support.

But overall, M&A discussions are increasing, he noted.

“It’s encouraging to see a lot of companies that are out there are interested in possibly making a move,” he said. “I think it’s been a very volatile past few years, and it’s been emotionally difficult for a lot of business owners and I think they’re interested in considering their options.”

Because most discussions to date have been with Ontario-based companies, Daniel said travel restrictions haven’t posed any barriers to getting a deal done.

“Most trucking companies have the safety protocols in place, so we are having meetings,” he said. “That aspect is not necessarily a hindrance to getting a deal done.”

Cross-border travel restrictions, however, have postponed opening of a third U.S. logistics operation, which Titanium was hoping to have up and running this year.

Chief operating officer Marilyn Daniel said Titanium was able to keep most of its drivers working through the crisis and has resumed hiring.

“We are now in growth mode again and acquiring new drivers into our fleet,” she said. “There is no struggle at the moment in finding drivers. We’re finding the talent pool out there for drivers has actually increased and our pipeline of drivers is really full.”

Massachusetts Police Got Tactical Gear Worth Millions From Controversial 1033 Program...