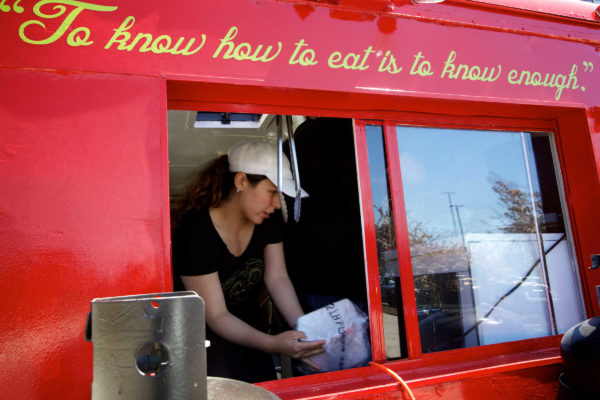 April Garcia readies the El Corazon food truck for lunch in Portland Wednesday. The saying written above is a translation of a popular Basque saying.

Not that everybody wants it there, WGME reports.

“We had a really wonderful day downtown a couple weeks back,” Alexander said. “It was very successful, and many people came out, but unfortunately there were a couple complaints from establishments that say we are coming in and competing with them.”

Food-truck food is a staple among Mainers. Whether in Bangor or York, a wide variety of cuisines is available on four wheel s in popular locations such as the Bangor Waterfront. Sometimes they are operated by big chains such as Chick-fil-A or transition to more traditional brick-and-mortar locations or are long-defunct businesses come back to life ― they’ve even been targeted by thieves in search of munchies ― but come the start of food-truck season, they usually work in harmony with local governments.

Not this time. Richmond’s town manager, Adam Garland, confirmed that businesses complained about the truck location and that town officials told Alexander that she couldn’t put the truck in her yard ― a mistake. By law, it can operate on private property.

“The businesses that called to complain will just have to realize that they have every right to continue operations,” Garland said.

Alexander said she’s still in shock that someone would complain about her trying to make ends meet. She said the business is not making as many trips as usual, due to closures of fairs and statewide events caused by coronavirus lockdowns, according to WGME.

“So now, people have the opportunity to just pull up to our house here, and we can bring the food right to their cars,” Alexander said.

“Just trying to pay the bills is an uphill battle right now,” Mr. Tuna food truck owner Jordan Rubin said. “Everything is changing week to week, we’re just trying to stay on top of that.”

He said his business has moved exclusively to curbside pick-up. Alexander and Rubin hope the community will support all types of local food operations now, WGME reports.

Ye Olde English Food Truck won’t stay parked for long. Alexander said that in two weeks they will travel to Presque Isle. Details can be found on their Facebook page. Mr. Tuna’s sushi can be ordered through their website.