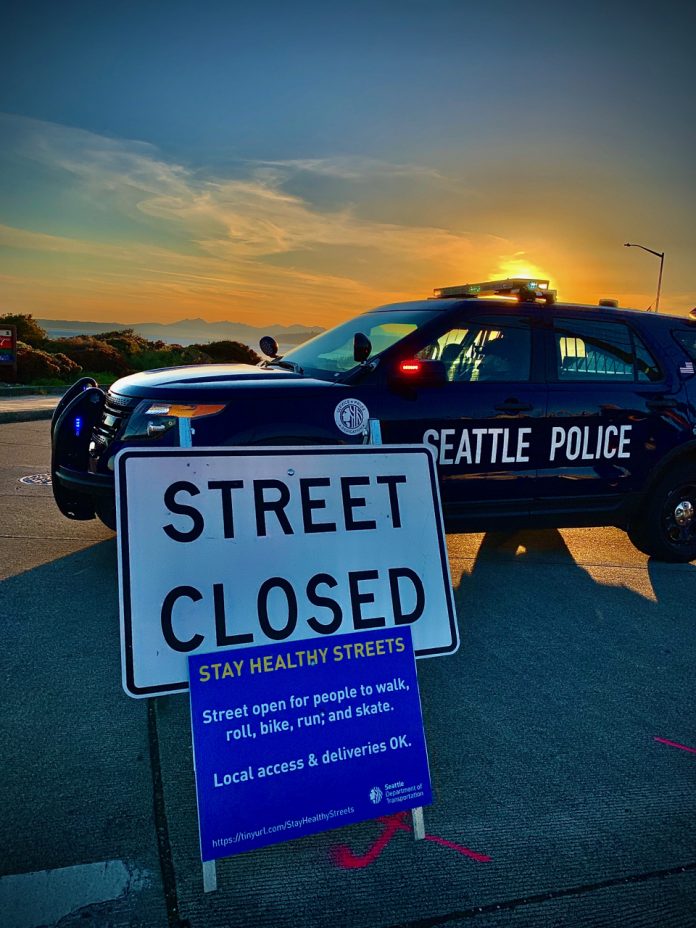 A section of beach Drive near Alki Point was closed to traffic, sort of by Seattle Police.

As part of their “Stay Healthy” streets program, the Seattle Department of Transportation has closed the street in front of my house. Only, it isn’t really closed. There is only slightly less traffic than normal, despite the signs at either end of the block that say explicitly, “STREET CLOSED”. I’ve watched numerous cars approach the corner, take a look to see what’s going on, and after seeing that everything appears normal, they simply drive right past the sign and the orange cone.

If you’re unfamiliar with the program, SDOT is closing streets to give folks the extra space to walk, run, bike, etc. while continuing to practice social distancing. I’d agree that it’s kind of a corny idea, but what’s it hurting, really? There are perfectly good streets to drive your car or truck one block to either side of my street. Whether traveling east or west, you’ve got options.

When I first noticed the signs, I suspected they were there as part of the program (confirmed the next day when signs made specifically for the program were affixed to the metal signs), and I was excited at the prospect of having a reprieve from the traffic on what is usually a particularly busy residential street. I should’ve known better.

Most of us simply aren’t used to having to sacrifice anything, and, all too often, any restrictions are blown off with an attitude of, “That restriction doesn’t apply to me.” As I watch an SUV blow past, I can almost hear the driver say, “Whomever placed that sign there obviously didn’t know that I’d be going to Target today.” Ultimately, the inconvenience of having to drive an extra block cannot be tolerated. The entitlement is real.

Us white people don’t have a monopoly on this way of thinking, but, collectively, we are the absolute worst. We expect to be able to go anywhere and do virtually anything we want, and if anyone calls us out on it, we are quick to play the victim. And this isn’t a liberal or conservative thing, we all do it. Whether it’s showing up to a capitol building dressed in tactical gear and sporting a rifle, knowing full well black and brown people couldn’t do the same, or asking to speak to the manager because a line employee won’t bend the rules for us, it all looks pretty much the same.

We’re all very aware of what we can and cannot get away with. We begin learning these things very early in life, we never really stop, and it’s almost entirely learned through experience. But we all have unique experiences in life, and thus, very different perceptions of what’s acceptable behavior.

I understand how the privilege given to us because of the color of our skin could be a difficult thing to grasp. We’ve always had it, we didn’t have to ask for it, and we can’t stop it if we tried. Even if you make a conscious effort to be aware of it, you’re going to miss nearly every instance of it. All the same, it’s important to know your privilege, and maybe more importantly, to know that not everyone possesses the same.

Having attended Garfield High School in the ‘90s, I frequented Ezell’s Famous Chicken across the street from campus. The restaurant itself looks similar now to how it did then, but there’s a noticeable difference in the number of white customers these days. The demographics of the Central District have changed, so it makes sense. White folks are venturing into areas they mostly avoided before. This isn’t necessarily a bad thing. With the help of a new customer base, Ezell’s has grown to fifteen locations. But this freedom of movement should go both ways.

It might be easy to say that the murder of a 25-year-old black man who was simply jogging in a predominantly white neighborhood in Georgia, by two white men who claimed he fit the description of a burglar, is far removed from us here in Seattle. It’s easy to brush it off as just a “southern issue”. But black and brown people are treated with a similar suspicion here; and suspicion, and especially fear, can easily lead to a wrongful death.

It is a privilege I have, despite doing nothing to have earned it, that I, as a white man, have never had to get up in the morning and ever wonder how the color of my skin might negatively affect me. This should be the case for everyone.

Our Girl soldier Fingers dies after being shot

Time to hit the links for a good cause

Fueled by quarantine end, cycles and kayaks in high demand |...