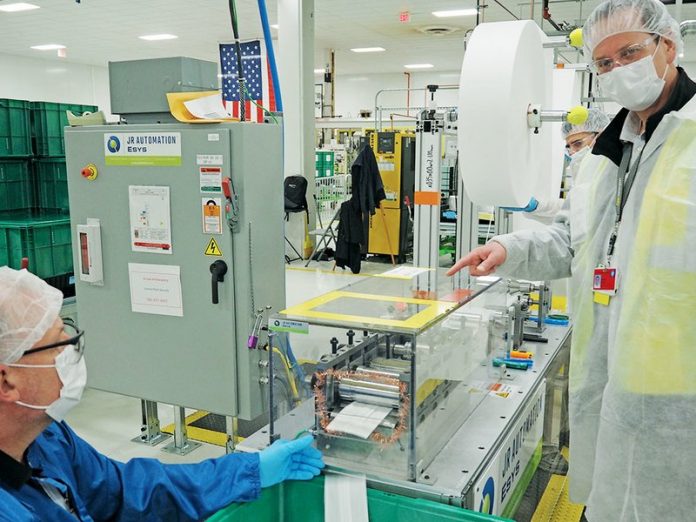 Instead of just staying home when General Motors shut down its Indiana pickup plant to protect workers from the coronavirus, Kevin Rowan volunteered to drive three hours a day for 10-hour shifts to help the automaker build hospital ventilators.

“Just watching the news every night, you’ve got to feel compassion for anyone that needs one and doesn’t have one,” he said. “It just breaks my heart when they say there isn’t enough.”

Rowan, normally a material flow coordinator at Fort Wayne Assembly, has used the machinery chops he gained on his childhood family farm to train about 100 voluntary workers to build a power bracket that holds an oxygen controller for the ventilators. GM has a contract with the federal government to build 30,000 of the devices at a parts plant in Kokomo, Ind., by the end of August.

He’s among more than 1,000 workers helping GM make ventilators, face shields, masks and gowns while most of the company’s North American plants remain dark. When the rest of their colleagues will come back remained uncertain, particularly after the UAW last week opposed the early May restart timeline many automakers were aiming for. Calling back all workers at this point would be “too risky” for them, their families and the surrounding communities, UAW President Rory Gamble said.

In the meantime, Rowan and others — including some temporary workers hired specifically for medical production — continue to show up, keep their heads down and stay at least 6 feet apart. As of last week, GM had shipped some 600,000 face masks and more than 50 ventilators.

“It’s entirely different than building a truck, let me tell you,” Rowan told Automotive News by phone from the plant last week. “It’s just mind-boggling to start a factory from scratch the way we’ve done it. I’ve never seen anything like it. Usually when we launch a new truck, we’re working on it for a year. We’re doing all this in just weeks.”

Make Jinja a city, Bugembe a rolex and sleazy town

MSNBC host goes off on protesters who think COVID-19 is ‘no...