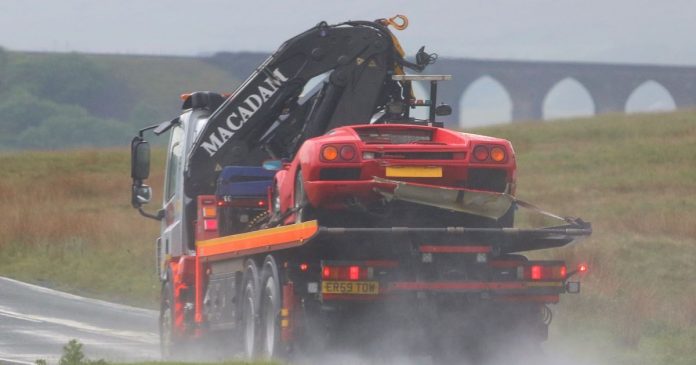 A trailer for the upcoming series of Top Gear has given fans their first look at Paddy McGuinness’ Lamborghini crash.

Paddy, who presents the show alongside Freddie Flintoff and Chris Harris, had fans worried sick in June when he spun out of control while driving a Lamborghini Diablo.

The star was left uninjured but “shaken” after he misjudged a corner and sped off the road. He skidded on oil found at a curve on the B6255 near Ribblehead in North Yorkshire, closed to the Lancashire and Cumbria border, before crashing.

A new one-minute teaser sees a brief look at the accident, Paddy heading off track before the screen cuts to black, before showing the car being carried away by a truck.

The rest of the trailer sees the usual Top Gear chaos fans have come to expect and love, like the boys taking control of an all-terrain ice cream van.

After his accident, a source said: “Paddy is fine but a bit shaken as anyone would be when having a scare at speed.

“It could have been a lot worse.

“There’s always paramedics and police on a Top Gear shoot so he was in good hands for a onceover but he’s smiling as ever.”

A spokesperson for the North Yorkshire Police said at the time: “Police attended a collision involving a Lamborghini Diablo, which crashed into a field after the driver lost control on the B6255 near Ribblehead.

“The incident happened at around 3pm today.

“A Roads Policing Group officer noticed the incident while patrolling the route, which has a high number of serious and fatal collisions.

“Fortunately, nobody was injuries and no other vehicles were involved.”