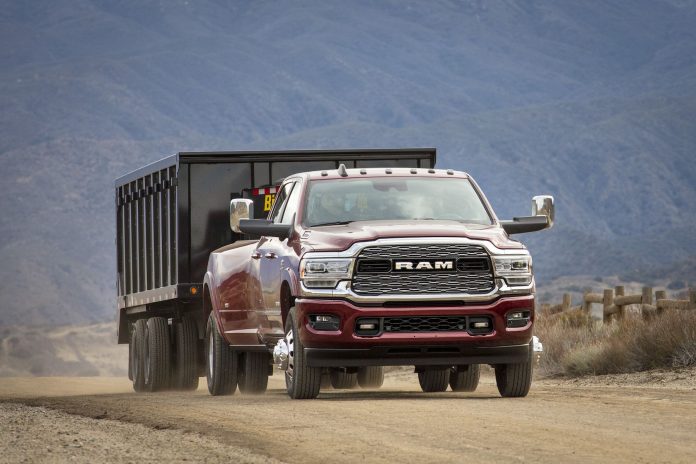 If you’re confused as to why truck owners brag as much as they do about the amount of torque produced by their pickup’s engine, consider this. An old saying posits most people want horsepower but actually buy torque.

There’s a lick of truth to this old saw — it’s certainly higher in veracity than your know-it-all uncle’s insistence modern cars still need a tune-up every 5,000 miles.

Unequivocally true is the fact torque is simply a force and a distance, measured in foot-pounds or Newton-metres. It’s a vector quantity, measuring the amount of force available when an engine exerts itself.

Pistons in an engine reciprocate on the crankshaft, causing the latter to rotate (or twist) continuously, creating torque that’s sent to the vehicle’s wheels through the transmission and drivetrain. Simply put, the torque-ier an engine, the better suited it is to hard work like hauling a trailer or climbing hills. This explains why torque is the figure to which most pickup shoppers gravitate when choosing a truck to move something heavy.

Ram has always had plenty of the stuff, boasting about its torque number for decades, and making it a good candidate to plot the growth of torque output in the pickup segment.

Ram was the first to offer a diesel engine with four-figure torque to retail customers after all, breaking the 1,000 lb.-ft. barrier with its latest Heavy Duty series of pickups. We decided to take a look at some of Ram’s torque milestones, marking the highlights and jumps in output over the years.

The pairing of Ram and Cummins brands is etched into nearly every truck-minded gearhead, even if they’re a Ford or Chevy diehard. Some people use the brands interchangeably and with good reason — Ram has spent decades and untold millions pushing the narrative its trucks are powered by these diesel engines from the Columbus-based company.

This hookup stretches back to 1989, when the company introduced the first Cummins-powered Ram. The inline-six engine made 160 horsepower and 400 lb.-ft. of torque, a huge number for the day. Its displacement checked in at 5.9L, but marketers of the day put the emphasis on Cummins rather than the engine size for fear of confusion with the 5.9L gasoline-powered Magnum V8. Power was sent to the tires via either a beefed-up automatic or a five-speed manual.

Over a decade later, the venerable Cummins still displaced 5.9L but had grown in torque output to 420 lb.-ft. by the 2000 model year, with horsepower rising to 235 ponies. Historians will point out the Cummins was redesigned as a 24-valve engine two years prior but, for this story, know that power numbers didn’t change until 2001.

For the new millennium, Ram upped the ante and offered not one but two variants of the engine — a regular and High Output iteration. If this sounds familiar, it’s because this is the same strategy it uses in today’s Heavy Duty trucks.

In 2001, customers could get a Cummins with the aforementioned 235 horsepower and a newly-stout 460 lb.-ft. of torque. This was impressive, but those looking for bragging rights at the Love’s Truck Stop knew they had to pop for the High Output version, rated at 245 hp and 505 lb.-ft. of twist. This was the first time a Ram truck was available to retail customers with an engine making in excess of 500 lb.-ft. of torque.

The 500-lb.-ft. mark didn’t stick around for long. When looking at a truck from this era, Mopar fans will know to look for a VIN designation of either ‘6’ or ‘C’, denoting standard and high-output Cummins engines, respectively. While the SO truck’s torque output remained the same at 460 lb.-ft., the HO truck got a nifty ‘triple-nickel’ worth of grunt, 555 lb.-ft.

This was also around the time of the Ram’s first significant body style change since the ‘big rig’ styling appeared to eat Ford and Chevy’s lunch in 1994. It’s worth noting that 1500-grade trucks got the new duds first, followed by the Heavy Duty units (in which these diesels were available) about a year later.

This five-year stretch could easily be called the ‘600 Club’. Why? Ram had its first foray into that number bracket in terms of total torque output from its Cummins engines. True Mopar nerds will point out it was actually halfway through the 2004 model year when the HO version got its 610 lb.-ft. rating, a number it would wear until 2007.

For a pair of model years after that, all Cummins I6 diesels would be rated at a stout 650 lb.-ft. of torque, more than the SRT-10 gasser of a couple years earlier and way more than the storied 8.0L V10 Magnum from the beginning of the decade. Horsepower was a solid 350 ponies by this time if you’re wondering, not that anyone was.

Torque in the 700 bracket? Pshaw. Ram engineers saw no need to sully themselves with such trivial numbers, blowing right through that mark and landing at an even 800 lb.-ft. for Cummins engines mated to a six-speed automatic; and 850 lb.-ft. when hooked to a different six-speed made by Aisin. Pedants will note the magic eight-century mark was actually breached halfway through the 2011 model year, but only in HO models.

By this time, the inline-six had grown in displacement to 6.7L, meaning there are essentially a sextet of paint cans hammering away under the bonnet of each Ram Heavy Duty equipped with a Cummins diesel. While most of us wail about saving the manuals, it’s worth noting that Cummins-equipped trucks fitted with a six-speed manual were limited to “only” 660 lb.-ft. of twist. This helped prevent the transmission from reducing itself to 10,000 oily bottle-caps.

This footnote represents the power wars that were happening in Motown around this time, as the Detroit Three kept trying to one-up each other in the torque arena for their Heavy Duty trucks.

For 2015, the Cummins was rated at 865 lb.-ft. The next year, engineers (or maybe the marketers?) found a few more twist units to push the engine to an even 900 lb.-ft. of twistage. This is where it stayed for just two years until, in response to competitors, the 6.7L beast was cranking out a maximum of 935 lb.-ft. of torque.

Here’s the big one: 1,000 lb.-ft. of stump-pulling torque. Coinciding with a new body style and sumptuous cabin, the crew at Ram finally breached the four-figure number for torque in a retail setting. Given the brand’s penchant for brash styling decisions and outrageous paint options, it’s not wholly surprising Ram was the first to do so. Note that figure is only good for the High Output engine.

Fun fact: rumours from within the company claim the four-figure mark wasn’t in the original brief when designing the truck. Sure, each of the Detroit Three wanted to be the first, but lore says it was only after running the numbers – and realizing they were so close – that they put the 1,000 lb.-ft. on the corporate dartboard.