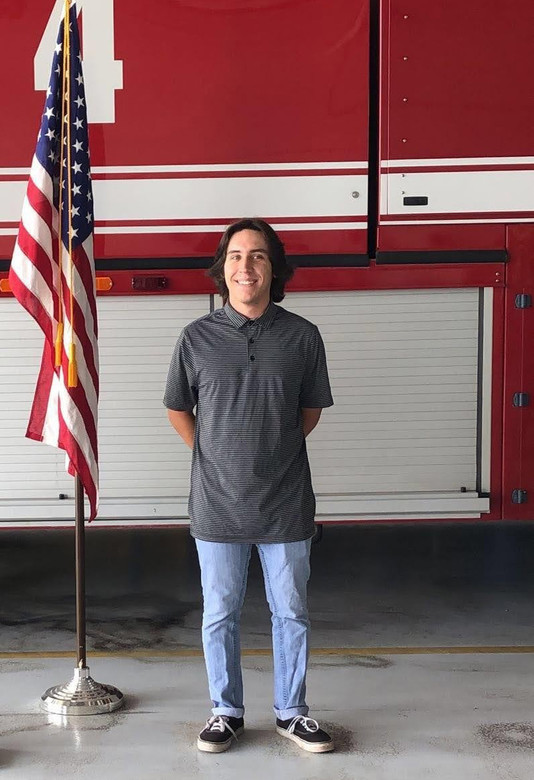 As Air Force Recruiting Service continues moving to a Total Force recruiting enterprise, the goal is simple – find the best way for a person to serve – full time, part time, in uniform or out of uniform.

For recruiters from each of the three military components this is a paradigm shift, as regular Air Force, Air Force Reserve and Air National Guard recruiters are asked to do the right thing for the recruit, even if that means missing out on signing the person and helping the recruiter reach their goal.

Recently, the Idaho Air National Guard and the Air Force Reserve worked together seamlessly to ensure a young man got the job he wanted and made sure his family could attend his enlistment.

When Connor Tabarini and his father, Carlos, came to the Gowen Field ANG recruiting office in Boise between his junior and senior year of high school, Tabarini made it clear he wanted to be a firefighter.

“Conner desired to become a firefighter, he wanted it more than anything and took required courses and volunteered his time to set himself up for success and the best chances to attain the 3E7X1 Air Force Specialty Code,” said Senior Master Sgt. Milo Davis, Idaho ANG production superintendent.

One of the things about recruiting to a reserve component is having the jobs available that a recruit may desire. In this case when it came time for Tabarini to enlist, the Idaho ANG did not have a firefighter position available. Tabarini was determined to get that job though.

“I’ve always had a passion for firefighting and helping people in need,” Tabarini said. “I love to be active and firefighting lets me do both at the same time. I also have a few family members and friends who are in the fire service who have told me all the good things about firefighting.”

“After speaking with Conner and his family at length, we looked at many options and AFSCs,” Davis said. “I advised Conner and his dad to remain resilient, and that all good things come with hard work and sacrifice.”

Once it was clear Tabarini only wanted to be a firefighter and was unwilling to look into other AFSCs, Davis reached out to the Air Force Reserve recruiter at Mountain Home Air Force Base.

“Connor was sent to the Air Force Reserve from the Air National Guard since they didn’t have vacancies in the position he was looking for,” Billingsly said. “They could have told him to take another position but they didn’t. This is the way Total Force recruiting should handle their applicants by doing what is best for them. We are all air components after all.”

Transitioning Tabarini to the Reserve was welcomed by Connor and his family, and a more familiar place for his father.

“Since Conner’s father was a prior Air Force reservist, the connection was second nature,” Davis said. “Once the connection was made, Billingsly took charge and coordinated all required communication between the unit in Utah and Conner. All parties felt like this option would best suit Conner and his desire to obtain the AFSC training necessary to further his career.”

Since the Air Force Reserve doesn’t have a unit at Mountain Home AFB, the closest unit was at Hill AFB.

“The Guard was very supportive with helping to transition Connor to an Air Force Reserve position, once we let them know he had found and committed to a firefighting position at Hill AFB,” Carlos Tabarini said. “They were able to systematically make available Connor’s packet to the Reserve recruiter, which was very helpful, as Connor had already qualified for the position in which he was interested.”

For Tabarini, getting the job he wanted was always his goal, but the cooperation between components will now let him become a firefighter.

“I thought it was great,” Tabarini said. “Everyone who helped me along the way through this process were very patient and understanding and overall just trying to help me accomplish my dream of becoming a firefighter. I couldn’t have done it without their help.”

“I was very impressed with the communication between Tech. Sgt. Billingsly and our Idaho Air Guard Team,” Davis said. “Since becoming a recruiter on active duty in 2000, and eventually transitioning into the Air National Guard, I’ve always felt passionate about the role of ‘Total Force.’ This was simply an execution of what should be taking place across the entire enterprise and it was a blessing to be a part of it and see the continued growth.”

Billingsly echoed the Total Force sentiments of Davis with both realizing this is the way of the future for Air Force recruiting.

“Total Force recruiting is the next step in how we take care of our applicants,” Billingsly said. “It will give them more options that will help them with building their foundation for the rest of their lives.”

Now that it was settled that Tabarini would join the Reserve, the next obstacle was where he would do his enlistment. Mountain Home AFB was several hours away from the Tabarini family and getting away from work might be tricky.

When Davis heard that the distance would cause Carlos to not be able to attend the enlistment, he made sure the Guard was there to help make it a special day for the Tabarini family.

“I reached out to the civil engineer commander and fire chief, and lead IDANG recruiter to set up a special ceremony,” Davis said. “I offered this because it simply was the right thing to do and shows that Team Idaho practices what we preach.”

The Tabarini family was now able to attend his enlistment and couldn’t be more thankful.

“Words alone cannot express the thankfulness and gratitude our family felt for the thoughtful efforts put forth to having Connor’s enlistment done locally in front of Engine 4 at Gowen Field’s Fire Department,” Carlos said. “If you could have seen Connor’s face when we walked into the engine bay of the fire house, as the reality set in that he was going to be a firefighter, the culmination of the last three years of pursuing firefighting education was quickly becoming evident.”

“I had no clue until a few days before my swear-in that I would be doing it in the fire house in front of a fire truck,” Tabarini said. “I was so excited when I got there that I literally walked off to go look at all the trucks and gear and forgot that we were still doing the swear-in. I was also really glad that my family and girlfriend could come watch me swear-in and celebrate with me after it was all said and done.”

While the Total Force recruiting enterprise is still new, the recruitment of Tabarini is a good example of how things should be done.

“We are one Air Force, we fly, fight and win, not solely because of technology, but truly because of the amazing Airmen that we have within our ranks,” Davis said. “These Airmen seek and understand the mission and how each of us impact the mission as a whole. Team Idaho believes that good things happen to good people, and that we all can live a happier, healthier and genuine life by simply doing the right thing and giving of ourselves.”

Although Carlos didn’t know about Total Force recruiting initially, he did notice the teamwork executed during his son’s recruitment.

“I did not know that the Air Force officially adopted the Total Force recruiting model, but I could feel the willingness and synergy while working with the Idaho ANG over the past year,” Carlos said. “From a parent’s perspective, the cooperation between the Guard and Reserve made for a positive and more pleasurable recruiting experience for our son. In my opinion, this is the right direction for the Air Force and future generations that will serve, ultimately improving the quality of recruits while meeting the Total Force needs.”

Do Your Stores Really Need A Retail Operating Procedures Manual?

Osterhout to Hold Annual Gala, With a Twist