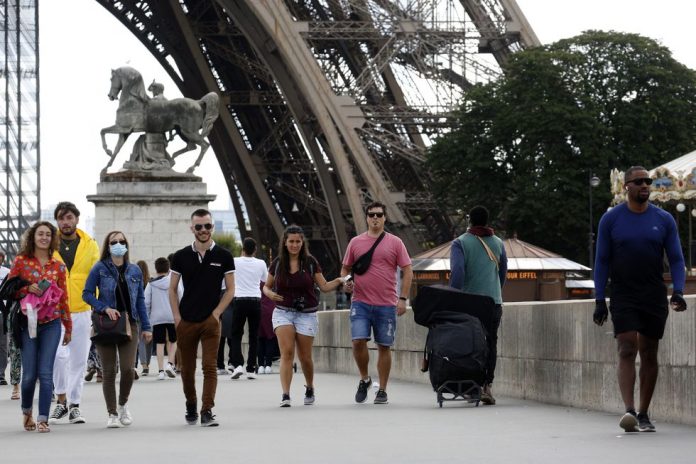 MITO, Japan (AP) – Countries are considering putting away their welcome mats to tourists and regional meetings are being put on hold as the coronavirus pandemic strengthens its grip in many of the worst-affected countries.

The biggest driver of new infections in Australia’s biggest current outbreak is people continuing to go to work after showing symptoms, Victoria state Premier Daniel Andrews said. The state on Monday reported a record 532 new cases, while its biggest city, Melbourne, is almost half way through a six-week lockdown aimed at curbing community spread of the virus.

“This is what is driving these numbers up, and the lockdown will not end until people stop going to work with symptoms and instead go and get tested,” Andrews said.

Australia is among many nations in the Asian-Pacific where foreign travelers are essentially banned or, when allowed to enter, required to submit to tests and strict quarantines.

The dearth of such international travel has cleared Asian skies of the jet trails that are a background sight for much of the world.

At the same time, some countries that have let limited international travel resume are reconsidering as clusters of cases grow into new outbreaks.

Some European nations were warning citizens not to visit Spain after some of its most beloved summer venues turned into coronavirus hot spots facing renewed pandemic lockdowns.

The northeast regions of Catalonia and Aragón host the three most alarming virus clusters in Spain, prompting authorities to tighten restrictions in Barcelona, in a rural area around Lleida and in Zaragoza that were relaxed only a month ago when Spain had its devastating outbreak in check.

Facing the reality that travel restrictions would force meetings online, Vietnam postponed next week’s hosting of Asia’s largest security forum and an annual meeting of Southeast Asian foreign ministers by a month to September due to the pandemic.

Two Southeast Asian diplomats said Vietnam, which leads the Association of Southeast Asian Nations this year and appears to have controlled virus outbreaks within its borders, hopes to hold face-to-face meetings in mid-September.

Crossing borders was linked to other outbreaks in Asia.

South Korea said 16 of the 25 new cases it confirmed Monday were tied to people arriving from abroad.

The country in past days have reported dozens of cases among crew members of a Russia-flagged cargo ship docked in the southern port of Busan and hundreds of South Korean construction workers airlifted from virus-ravaged Iraq.

One of South Korea’s recent new cases was a traveler who arrived last week from New Zealand, which has not had a community-transmitted case in three months. Any proof the passenger caught the virus while in New Zealand would come as a big shock to the island nation of 5 million people.

New Zealand health authorities said they will trace and test people who came into contact with the traveler. They are also asking the traveler be retested.

New Zealand officials said their South Korean counterparts suspect the traveler was infected while transiting through Singapore. “We have got our contact tracing system kicking into gear though,” Health Minister Chris Hipkins said.

— South Africa logged 11,000 new cases and has the fifth largest caseload in the world at more than 445,000. President Cyril Ramaphosa announced an investigation into allegations that unscrupulous officials and companies are looting efforts to protect the country’s 57 million people. He has has said the recovery from the pandemic will be “long and difficult” but experts say the worst is yet to come.

— India added three new facilities to ramp up testing capacity as it recorded nearly 50,000 fresh virus cases. Its tally of more than 1.4 million is the world’s third-highest after the United States and Brazil. The three facilities in Mumbai, Kolkata and suburban New Delhi that start operations Monday are each capable of analyzing as many as 10,000 tests per day.

The number of worst-affected countries where newly confirmed cases are rising still outnumbers countries finally seeing a downward trend in infections, according to data compiled by Johns Hopkins University.

Its tally shows more than 16.2 million cases of COVID-19 and more than 648,000 deaths. The actual numbers are thought to be much higher due to limits to testing and other issues.

Associated Press reporters from around the world contributed to this report.