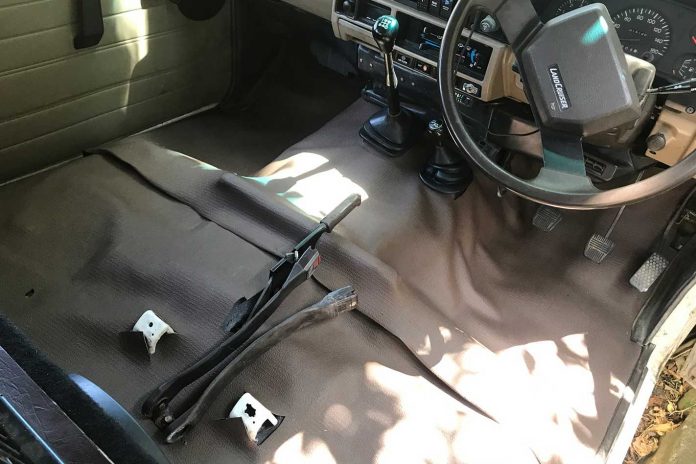 While I do agree with that sentiment, the noise that gets through to the cab of my old BJ73 does have its limits, especially at highway speeds.

IN THE SHED: LandCruiser BJ73

The 13b-turbo 3.4-litre four-cylinder engine in the BJ is essentially a truck engine and was used in Dyna trucks and Coaster busses as well as the old Cruisers. It’s a large capacity for a four-cylinder engine, and those big pots create a lot of noise and vibration. After many years of putting up with it, I thought enough was enough and, while the seats were out to get a refit, the time was right to recover the floors and add some insulation. Maybe I’m getting soft in my old age.

This is a 1985 LandCruiser, the first year for the new 70 Series, and these were built as commercial vehicles. Hence the use of a truck engine and the lack of any real sound-deadening material or insulation beneath the floors. This one did have carpet, but it was worn-out and haggard and I wanted to replace it with easy-care vinyl covering.

Vehicle restorers and anyone who owns and drives old cars are spoilt for choices when it comes to replacement or aftermarket floor covering, but one name I knew from decades back in the street machine and muscle car days is Tru-Fit Carpets of Melbourne. Like so many clever companies, the team at Tru-Fit has seen the 4×4 market booming and now manufactures and sells its products to suit a range of vehicles.

Tru-Fit Carpets has been in business for more than 30 years and these days trades under the Vision Auto umbrella, manufacturing replacement floor coverings in carpet or vinyl, floor mats and insulation products. As part of its extensive range it even has products specifically for rare vehicles like the mid-wheelbase LandCruiser.

TRU-Fit’s replacement vinyl and carpets are specifically cut and moulded to suit each vehicle. They are heat-shaped over a mould to best meet the contours of the floor pan, to give a factory fit and appearance and make them easier to fit.

For the BJ73 Middy, the covers, be they carpet or vinyl, are full width and come in sections: the front which covers the footwells and back under the front seats; the rear which runs back to where the rear seats would go; and then the cargo area. This car has the rear seats removed with a cargo carrying floor installed, so we just went with the front and rear sections to cover the ‘cabin’ area of the interior.

Neville from Tru-Fit also recommended some sound-deadening to improve driving the old bus and showed us the Resomat sound deadener and Premium Underlay products, which he said would be ideal. 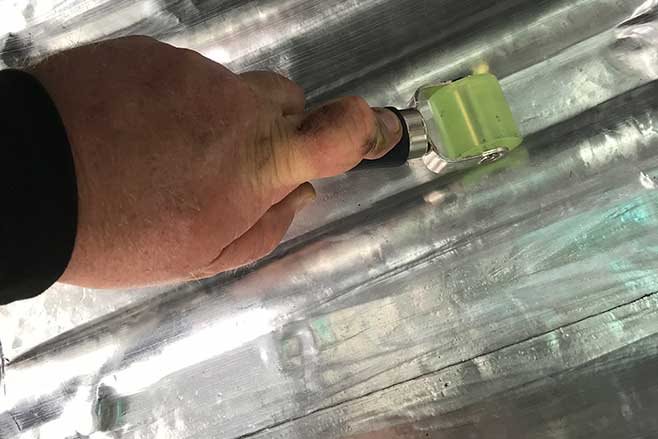 Resomat is a self-adhesive sheeting that is applied to the floor and other panels to insulate against noise and heat. It’s around 2mm thick and quite heavy, so you can feel how it will absorb the NVH by reducing resonance in the sheet metal panels and reflecting heat with the aluminium coating. It comes in sheets, which you cut to size using a box-cutter and stick directly to the panels.

This is the same stuff used in many European luxury vehicles, it’s not bitumen- or butyl-based, so it doesn’t give off any foul smells and is allergy free. It’s also easy to cut and shape into place.

Tru-Fit premium underlay uses two layers of sound-absorbing material, with a further insulating layer of vinyl laminated between them to provide the best sound-deadening qualities. Again, it’s odour free and cuts to size to sit under the carpet, or in this case, vinyl flooring. The underlay also adds to the premium cushioned feeling to whatever floor covering you put over it.

FITTING the insulation and floor is a DIY job that most folks should be able to achieve with basic tools. Aside from whatever tools you need to remove your seats, floor console and anything else that is on the floor, you’ll want a sharp box cutter knife and a small roller to press the Resomat in to the shape of the floor.

With the seats, belts and scuff plates removed from the front of the Cruiser, it was simple to pull out the old carpet. I have to admit I was worried about the condition of the floor panels in the 35-year-old car, but I was pleasantly surprised that they were rust-free. A thorough clean-up with truck wash, a bit of wire brushing a few spots of surface rust where the carpet had worn through, and finally a quick coat of rattle can paint had the floor ready to be re-covered.

The Resomat was cut into fairly large squares to cover the footwells, areas behind the seats and over the transmission hump, and then smaller pieces cut to fill in all the spaces left. You just peel the backing off the adhesive and press the material into place and then use the small roller to really press it into the shape of the floor, filling in to the corners.

I pulled out any floor bungs and grommets, and cut holes in the Resomat material before replacing them; some of them needing new ones. Be sure to mark out any bolt holes where the seats, belts and anything else goes in to the floor. Once covered they could be hard to find. 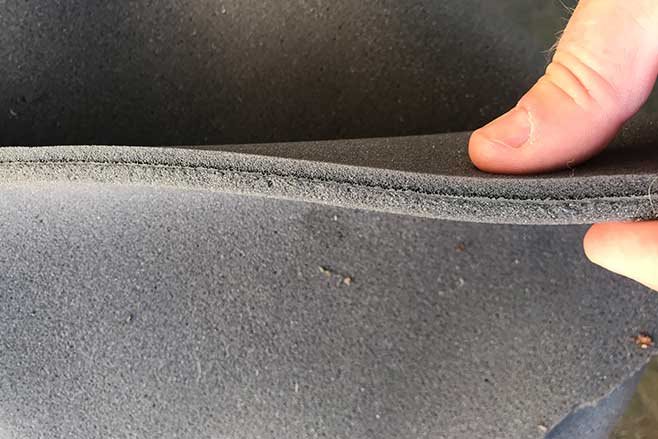 Aluminium tape is then used over any joins and around the edges to keep it all on place, but the adhesive backing does the job. I also worked as far up the firewall as possible and around the pedals to insulate the engine noise and exhaust heat.

The underlay can be cut into bigger lengths and laid directly over the Resomat, right out to either side of the cabin. Again, be sure to mark your bolt holes and cut around the park brake and shift levers.

The floor covering is moulded to be close to the shape of the floor, but you need to cut the holes for shift levers, seat bolts, seat belts and anything else that comes through from the floor. It’s also made wider than the cabin, so you need to trim the edges to suit and also up around the pedals.

Measure twice and cut once and you should be able to do a better job than I did. Press the covering into all the nooks and corners (use the roller again here) over any lumps in the floor to get it snug before making the final cuts. A bit of double-sided tape was also needed to hold the vinyl in place around the pedals.

REFITTING the front of the Middy’s floor was easily done in a weekend; you could probably do it in a day. The result is a floor that looks as good as new and, in this case, is now covered in easy-to-clean vinyl rather than the dirt-collecting carpets. With the refurbished seats bolted back in, it felt like a new truck.

Fire up the rattly old engine and it’s noticeably quieter at idle, but the real difference is out on the road where the cabin is much quieter and a nicer place to ride in. The suppressed noise actually makes the vehicle more solid and refined and less like the 35-year-old commercial vehicle that it is. Now if I could fix all the other rattles in it!

I used one roll of premium underlay and a single box of Resomat on the floors, which is designed to cover 3.5sqm. There’s a bit left but not quite enough to line the inside of the doors, so I’ll be going back to get some more to apply there, plus a replacement for the under-bonnet insulation.

All up with the new vinyl it cost around $500 in materials from Tru-Fit, and the result is a much better appearance with reduced NVH to give an overall more enjoyable driving experience. It’s given the ol’ Cruiser a new lease on life; at least from the driver’s seat.

March trailer orders down; April expected to be worse