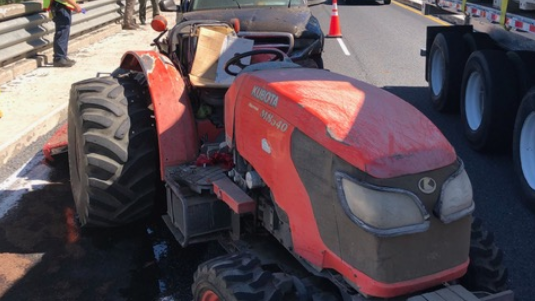 DRYDEN – A Wenatchee man was killed after the tractor he was driving was struck by a pickup truck Wednesday afternoon on Highway 2 near Dryden.

Ruben Pacheco Lopez, 59, was driving an orchard tractor westbound on Highway 2 when the tractor was struck from behind by a 2003 Dodge Dakota, according to the Washington State Patrol.

Both vehicles came to rest blocking one westbound lane.

Pacheco Lopez died at the scene.

The driver of the pickup truck, 32-year-old Seattle resident Derick S. Kuch, was not hurt. An adult passenger was taken to Central Washington Hospital in Wenatchee and two children in the truck were not injured.

The state patrol says Kuch was following too close and charges are pending.

A Reunion of Gratitude: Father gives another father a painting decades...