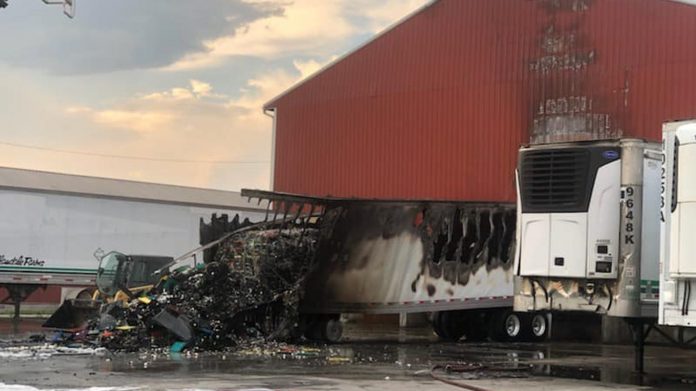 A fire that started at about 4:45 p.m. Monday evening on a tractor-trailer at the Nearby Eggs Inc. dairy farm in Codorus Township took about four hours to contain. The fire spread to another trailer and the loading dock of the building, causing an estimated $500,000 in damages. (Photo: Submitted c/o Jefferson Volunteer Fire Co.)

An egg truck that caught fire caused an estimated $500,000 in damage to a Codorus Township dairy farm Monday evening, according to fire officials.

The trailer was parked at the loading dock of Nearby Eggs Inc., at 2862 Daron Road, loaded with eggs ready for departure when the fire started, Walter said.

It spread to an empty trailer and some areas on the outside of the loading dock, causing an estimated $500,000 in damage, he said.

They were there for about four hours, leaving around 8:30 p.m., Walter said.

“The fire was made somewhat difficult today due to heat and lack of available water source,” he said, noting that the farm was in a rural area with only a nearby pond.

Firefighters went through “four cases of water, two cases of Gatorade, and two bags of snacks to help firefighters while fighting this fire,” noted a fire company Facebook post.

That’s not including what other stations and the Red Cross brought to aid the 100 firefighters at the scene in “real feel temp of 100 degrees wearing full turnout gear,” the post continued.

Walter said some employees were evacuated Monday but no one was injured.

What it’s like to be a long-haul truck driver in Canada...