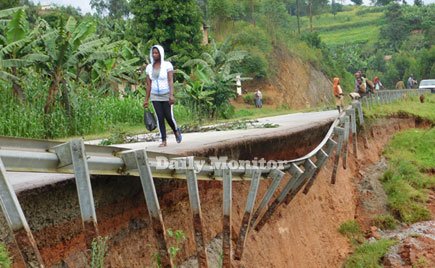 The UNRA station engineer for Kabale area, Mr Augustine Kabanda, said that part of the road in Kaharo Sub County, 18 kilometres away from Kabale town developed a pavement failure leading to the temporary closure.

“Because of heavy rains that have pounded the area for so many days, soils have become weak and this led to the caving in of the section of the road,” he explained.

Omungyenyi road section along the Ntungamo-Kabale road is another section that has been seriously damaged by the rains.

Mr Kabanda said that several bridges along the roads were washed away while others were hit by landslides.

“Rwahi-Rwashameire road in Ntungamo District has been completely cut off at Karuruma valley about 6km off Ntungamo-Kabale road at Rwaahi trading centre,” he said.

The Kabale District LCV chairman Mr Patrick Besigye Keihwa said that several bridges connecting different sub counties in his district have equally been destroyed. He added that crop gardens have been flooded.

“We are compiling the names of the people that have lost their valuable properties so that we can submit it to the office of the Prime Minister for possible relief,” he said.

Mr Besigye added that response to coronavirus alerts has been affected by the destroyed bridges and poor roads.