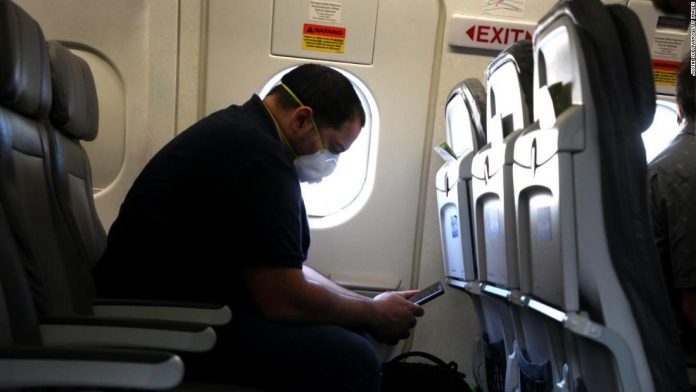 (CNN) — I’ve been a correspondent at CNN for three decades and can conservatively estimate I have been on at least 2,000 flights in that time. I’ve been to all 50 states while covering stories for CNN, and none of them fewer than five times. So it doesn’t surprise anyone who knows me well that I’m still flying, staying in hotels, and renting cars while covering stories that are affecting all of us during this outbreak of the coronavirus.

We are doing this while taking as many precautions as possible. Getting infected and then getting somebody else sick would be extremely upsetting. But of course, my colleagues and I feel very strongly that we have an obligation to cover the news around the country so our viewers stay informed during these difficult times. And a question I am very frequently being asked is: What is it like to be constantly traveling at a time like this? My initial answer is: It’s like nothing I’ve ever experienced before.

I covered the California primary on March 3. The first cases of coronavirus had begun to infect people in the US, and a few voters wearing masks came into the Sacramento polling place where we were doing our live reports. It was very early on in this crisis, and the sight of masks was still unusual; but I was certain presidential politics would soon no longer be the biggest story on CNN.

I flew from Sacramento to Seattle to cover the tragedy that was unfolding at the initial epicenter of the coronavirus outbreak in this country — the Life Care Center nursing home in Kirkland, Washington. From that point on, I’ve been traveling to report this crisis. Over the last two months, I’ve been to 15 states, covering stories ranging from the tragically high death toll in Navajo Nation, to houses of worship holding services that violate state laws, to meat plants shutting down because hundreds of their workers are getting infected. If it were a movie, what I’ve seen would seem dystopian. But there are so many good people doing heroic things. And that has given me faith.

Almost immediately, I saw the numbers of passengers on planes plummet. The most people I’ve seen on any flight over the last two months has been about 70 on a Delta Boeing 757 that seats 199 people. But most of the planes I’ve flown on have had fewer than 30 passengers. On a Delta regional jet I took from Cincinnati back home to Atlanta there were five passengers on board a plane that seats 76 people.

In early February, none of the flight attendants I saw had masks. And very few of the passengers did. But gradually, more and more of the cabin crew and the passengers started wearing them. And now, masks are mandated or strongly recommended, depending on the airline. Each carrier does things a bit differently; but having flown Delta the most over the last few months, here is what I’ve seen on those flights: There are no longer carts going through the aisles, and there is no alcohol, coffee, or soft drinks being served. There are no meals being offered, in coach or first class. You are advised to bring your own food or drinks on the plane. Water is given out by request and sometimes cookies or other small snacks. What is always being made available to passengers are packets of Purell.

Masks are now the norm, on cabin crew and passengers.

Delta is currently not assigning people to the middle seats. I’ve also been flying Southwest, and that airline doesn’t have assigned seating, but only sells the number of tickets that enable you to avoid sitting in a middle seat. So, while you may not be six feet away from the person on the aisle if you’re by the window, at least you have nobody right next to you. (Unless it’s your companion and you want to sit next to them.) During flight announcements, you are often encouraged to wash your hands, and you are given the prudent advice that in case you need to use oxygen masks, you should take off your current mask.

Boarding the flight has also changed. Before this all began, you boarded by zones; based on a combination of frequent flyer status, price you paid for the ticket, and airline algorithms. Now, boarding is done like it used to be decades ago. The Delta agents start with the back of the plane and work their way to the front. (First class still gets to board at any point.) Because the planes have so few people, the boarding process is very quick, and for that reason, the planes I’ve been on have more often than not left the gate prior to the scheduled time.

After the planes arrive and pull into the jetway, passengers are advised to remember their social distancing when they walk off the plane. I have not seen anybody who has purposely crowded into anyone’s space. As a matter of fact, I’ve seen almost uniform politeness and awareness of social distancing on each flight I’ve been on. I have certainly noticed that people look at each other on the plane with a bit of uneasiness, and I know passengers wonder why the others on the plane are traveling. There is indeed a strange vibe while you’re on such a relatively empty aircraft, with everyone wearing masks except when you’re drinking water or eating your snacks.

But in kind of a strange way, the whole flying experience is easier. In addition to having far more room on the plane, the TSA security lines in many of the airports I’ve been in are virtually empty. Atlanta’s Hartsfield-Jackson International Airport is the busiest airport in the world in terms of passenger traffic. On one weekday afternoon recently, I saw just two people waiting to go through the main security checkpoint. On a comparable afternoon just three months ago, you would have seen hundreds of people. The airport terminals themselves often look like quiet bus stations. Most of the stores and restaurants I’ve seen are temporarily closed. In the McCarran International Airport in Las Vegas, I saw a sight that made sense in the context of this pandemic, but still seemed stunning: all the airport slot machines were off limits and roped off.

No luck at McCarran — the airport slots were cordoned off.

Just as jarring as the airports and airplanes are the hotels. Every place I’ve stayed has been mostly empty. In Iowa, I stayed in a 195-room hotel that only had five rooms sold. And my satellite truck engineer, photographer, and I had three of them. The manager said that earlier in the week, there was only one guest. Most hotels where I’ve stayed no longer have housekeeping service during your stay, and restaurants, bars, and gyms are closed. But the employees I have talked to have been excessively kind and helpful. They are grateful they have jobs which means they are grateful for every guest who stays with them.

The rental car agencies are also suffering. On a trip to Kansas City during the middle of April, I hopped on the rental car shuttle that serves all the rental companies doing business at the airport. The driver of the shuttle told me he had been working for six hours and I was only the third person he had on the bus. He said there was one other bus in operation, and I saw that driver when we got to the rental cars. He told me that over a four-hour period he had driven two customers.

A near empty hotel parking lot in Waterloo, Iowa. The truck is CNN’s.

Over the last three months, I have been to big cities like New York and Los Angeles. Medium-size cities like Kansas City and Omaha. And small cities like Waterloo, Iowa, and Gallup, New Mexico, mostly with producer Leslie Perrot and photographer Ken Tillis. What we have noticed is virtually everywhere we’ve been, whether it’s a grocery store, a Target or Walmart, or a gas station convenience store, people are almost always abiding by social distancing. It’s become second nature in all parts of America we’ve visited, no matter how severe their coronavirus outbreak.

There is absolutely a far higher percentage of people wearing masks in public in big cities like New York and Los Angeles than there is in Mankato, Minnesota (where we just did a story on pig farmers), but when I walked into the Hy-Vee grocery store in Mankato, everyone was conscientiously standing at least six feet from the nearest person.

There is no end in sight to this crisis, which means there is no end in sight to our coverage of it. For me, that means more flying, hotel nights, and rental cars during this pandemic. I will continue to be as careful as possible when it comes to my health and the health of every person I come near. But just like when I’ve been in war zones, in hurricanes, and in riots, this is my job. And my duty.

America Is More Than Its Broken National Political Rhetoric

Investigation continues into truck vs. protesters on I35W in Minneapolis