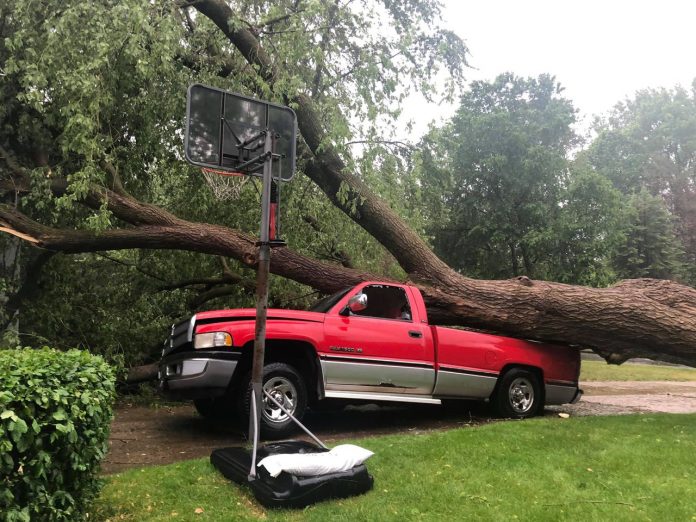 FLUSHING TWP, MI — Stephanie Breznau had seen the sky the same way before.

A Florida native, Breznau has been through a hurricane in the Sunshine State.

“The sky was very very gray, it was raining extremely heavy, but then all of a sudden the wind started up more than normal,” she said of the weather system passing over her family’s home in the Ponderosa subdivision in Flushing Township.

Breznau ran upstairs to grab her 3-year-old son Carson, while her 11-year-old son Hudson and 8-year-old daughter Everlynn ran down to the basement.

“I was super scared but running to get Carson and my kids down to the basement was all I could think about,” she said.

After all the children were settled in the lower level of the home, Breznau headed back upstairs to call 911.

“The trees were bending, and it was just going wild and then that’s when we heard a loud crack,” she said.

Looking outside, a 50 to 60-foot tall tree in the front yard had collapsed, crushing the family’s Dodge Ram pickup truck in the driveway and partially landing in the corner of the house where Carson was sleeping.

“The truck is totaled. We don’t know about the house yet,” Breznau said. “I don’t even want to think about where that tree would have landed if the truck wasn’t there.”

A line of storms roared across mid-Michigan Wednesday afternoon, leading to dozens of 911 calls for downed wires, fallen trees, and flooded roads.

Trees down, flooding reported as strong line of storms moves across Genesee County

The truck was in the driveway where the family’s van is normally parked, but Breznau’s husband Michael, the pastor at Mayfair Bible Church in Mt. Morris Township, had taken the vehicle for the day.

Breznau thanked a pair of neighbors who headed over to check on the family and help out after the storm had passed.

The family is still evaluating what damage took place to the home and if they can stay there Wednesday night.

“We definitely feel blessed and thank God we are OK,” she told MLive-The Flint Journal. “You can replace a truck and a house, but you can’t replace lives.”

Trucking could recover from Covid-19 quicker than other sectors: ATA economist...

Before the new restrictions, the police spread a wave of illegal...