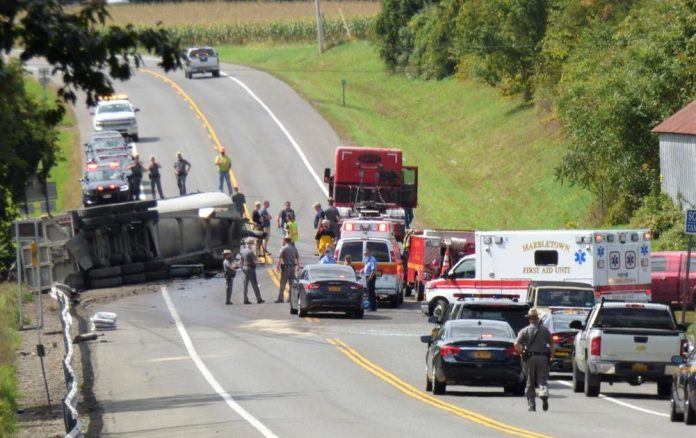 STONE RIDGE, N.Y. — A Monday afternoon collision involving a commercial vehicle and a car sent one person to a hospital and shut down part of U.S. Route 209, according to a state police spokesman.

Trooper Steven Nevel, the public information officer for state police Troop F, said a passenger vehicle hit a truck that was hauling gravel about 12:30 p.m. on Route 209 near Kripplebush Road, at the southern end of Stone Ridge. The truck ended up on its side.

One person was airlifted from the scene, Nevel said, but he had no information about the person or the injuries suffered.

The state Department of Environmental Conservation was called in to oversee the cleanup of what Nevel called “a significant amount of hydraulic fluid” at the scene.

Route 209 was shut down between Kyserike Road and state Route 213, and Nevel said the road probably would remain closed until at least 5:30 p.m.