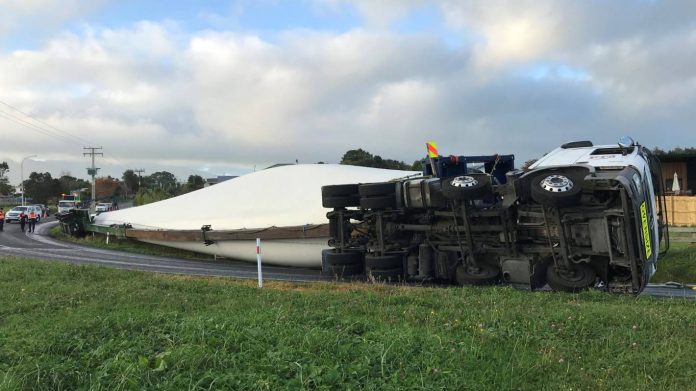 A truck transporting a giant turbine blade destined for use on a South Taranaki wind farm has tipped on its side along State Highway 45.

Police were alerted to the incident just before 8am on Tuesday near the intersection of the state highway and Hampton Rd.

A police media spokeswoman said contractors were on their way to the scene to lift the truck.

The highway is currently reduced to one lane, with stop-go traffic management in place.

Previously, the New Zealand Transport Agency (NZTA) warned motorists of delays on Tuesday morning due to the transportation of two 64-metre long blades from Port Taranaki to the Waipipi Wind Farm near Waverley.

The NZTA advisory said the truck was meant to leave the port at 3am and arrive at Waipipi by 8am, heading south through New Plymouth and then onto State Highway 45.

Other wind farm components will continue to be transported on a daily basis through to October, NZTA system manager Ross I’Anson said in the written statement.