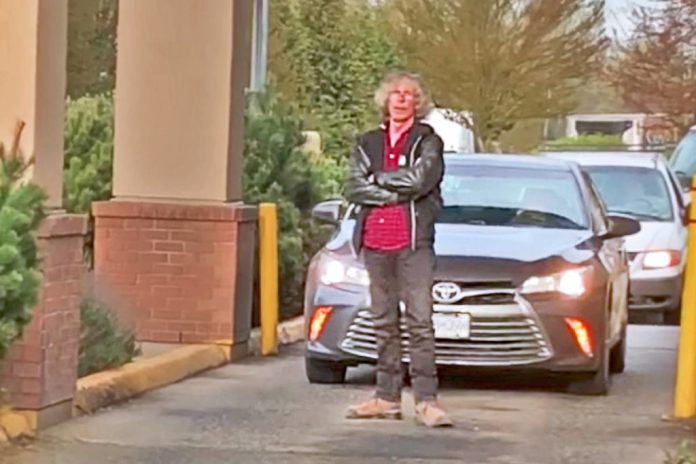 The modest community of Aldergrove has been thrust into the limelight after a truck driver was denied walk-up service at one of its Tim Horton’s drive-thrus.

In a video taken Friday morning, on April 17, a man identified as a truck driver, paces in front of the kiosk restaurant’s service window, arms crossed.

“They won’t serve this truck driver so he’s blocking it,” captioned Langley truck driver Andy Bessem – who recorded the act of protest.

“He wanted a coffee,” Bessem told the Aldergrove Star, after a brief conversation with the trucker.

Langley RCMP were called in after the trucker held up the drive-thru for what Bessem estimates was a half-hour.

After conversing with police, the truck driver “left peacefully. But he never did get his coffee.”

Multiple motorists offered to purchase the beverage for him, but Bessem said blocking the restaurant’s queue was about much more than getting his morning coffee:

“I’ve been a truck driver for 40 years and I’m very disappointed with Tim Horton’s that they won’t do this for drivers – essential workers.”

The truck driver – who asked to remain anonymous – corroborated his reasoning for the demonstration.

The video has since went viral, striking a chord with people all over the country who want to ensure truckers can find places to eat on their routes in the face of widespread restaurant closures due to the COVID-19 pandemic.

The franchise at 26474 56 Ave. shuttered in-store service mid-March to comply with a provincial health order to limit the spread of COVID-19.

“It is simply not safe to allow guests to walk through the drive-thru lane,” Tim Horton’s spokesperson Meghan Giffin told the Aldergrove Star on Tuesday.

Giffin added that, in solidarity with the trucker, the restaurant owner has implemented a carry-out system for truckers to get fed.

In Aldergrove, “signage has been posted, asking truck drivers to call a phone number so our team members can take their order and hand it off to them in a safe manner,” Giffin confirmed.

According to the company, more than 400 of its Canadian locations have introduced similar ordering options for truck drivers whose rigs are too large to navigate its drive-thrus.

The Aldergrove Tim Horton’s is located just off of the Trans-Canada Highway’s 264th Street exit.

The impact of the coronavirus on the Commercial Vehicles (Trucks) Market...

Hospital delivers bodies to Philly Medical Examiner in the open back...