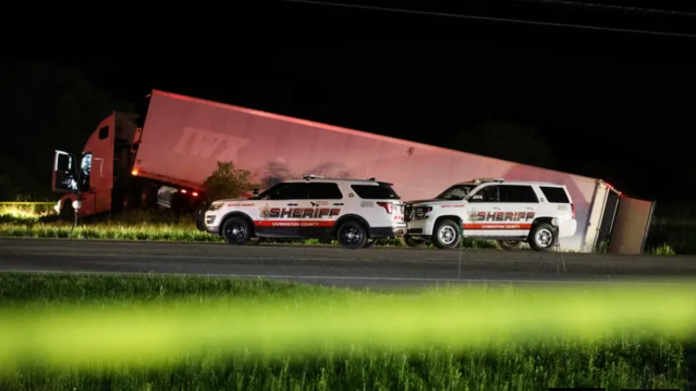 Livingston County Sheriff Thomas Dougherty has identified the man, a Virginia resident, who led police on a reckless chase through three counties before he was shot and killed Wednesday night.

The driver, Joshua Blessed, 58, of Harrisonburg, Virginia, also went by the name Sergei Jourev, Dougherty said. He had traveled to New York on behalf of a Yurman Express LLC., a freight-transport company based in Virginia, to retrieve dairy products from Batavia, Dougherty said.

Dougherty said it was not yet clear why the driver fled police and repeatedly fired at officers attempting to stop the tractor-trailer. He said police do not yet know what led to such an extreme encounter with police.

Blessed’s body was taken to the Monroe County Medical Examiner’s Office on Thursday morning. Dougherty said Blessed suffered multiple gun shot wounds, and it’s not yet clear if any shots where self-inflicted.

“It’s simply unbelievable that nobody was injured, aside from the suspect,” given the massive number of shots fired, the dangerous pursuit and the size and weight of the tractor-trailer, Dougherty said.

“I would call it a miracle, I honestly would,” Dougherty said. “God’s blessing. I have no clue how nobody was hurt. So many shots at law enforcement, the size of this vehicle, the weight of his vehicle, his driving, the civilians around.”

The incident started just after 8:35 p.m. in LeRoy, Genesee County, when a police officer stopped the driver for speeding on West Main Street. LeRoy Village Police Chief Chris Hayward said that the driver refused to follow the officer’s directions and drove away while an officer was still on the truck, forcing the officer to jump off the moving vehicle.

According to Dougherty, the driver made multiple U-turns during the pursuit, tried to run down numerous police cars and repeatedly fired shots at police.

Dougherty said the driver first traveled to Batavia, made a U-turn and returned to LeRoy and passed through Pavilion before entering Livingston County, driving over two sets of police spike strips and driving into Geneseo. At one point he drove onto Interstate 390, but turned again and returned to Geneseo.

The pursuit ended shortly before 10 p.m. near the Applebee’s restaurant on Route 20A in Geneseo, when officers fired multiple shots at the driver, Dougherty said. Blessed was pronounced dead at the scene, he said.

“He had no regard for human life, weaving this semi all over both lanes, specifically at our patrol cars,” Dougherty said.

No police officers or civilians were injured during the incident, but Dougherty said there were several close calls.

The driver rammed at least four police cars, including two cars from the LeRoy Police Department.

“He was purposely trying to hurt cops tonight and ultimately, this is how it ended,” Dougherty said at a late-night news briefing at the scene.

Dougherty said police had warned drivers about the chase and used cellphone and radio communications to clear drivers from the roads and later updated drivers after the chase had ended.

The pursuit traveled at normal, slow and high speeds, according to police.

Police recovered one handgun from Blessed in the cab of the truck. Deputies did not discuss specifics of the gun or Blessed’s background and declined to share details about the contents of the truck.

The stretch of Route 20A that was closed overnight reopened around 7:30 a.m., deputies said.

Dougherty said law enforcement was aware of several social media accounts belonging to Blessed. He declined to reveal the information present on those accounts.

Dougherty said the investigation is focused on Blessed’s last 24 hours before the incident. The sheriff said there are “some anti-law enforcement statements on his social media.”

“How extreme is he? What other encounters has he had with police?” Dougherty asked. “But a specific cause, we don’t have.”

Some Tosa businesses are getting creative when it comes to operating...