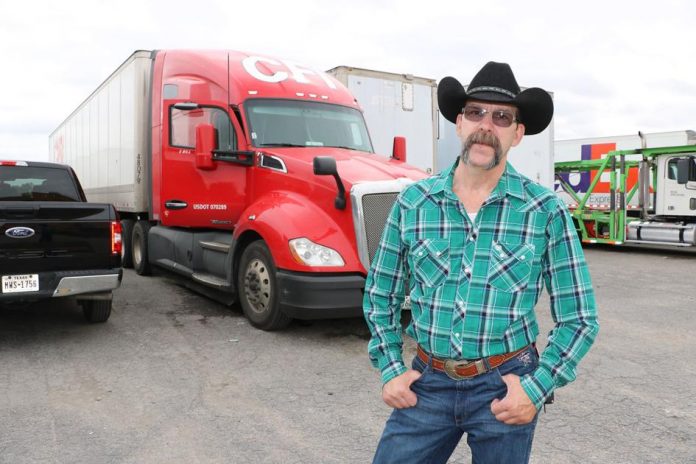 When news started spreading of stores with empty shelves and businesses closing due to efforts to help slow the spread of the novel coronavirus, members of at least one vocation shifted into high gear.

Truck drivers began showing their importance by hustling goods to the people who needed them and stores that couldn’t keep products on shelves. One area truck driver said he has felt the love from the public for doing what he does.

“There are more people, like, waving at me, honking at me and stuff like that,” said Jesse Colvin, a Guadalupe County resident, Seguin native and 12-year food and beverage delivery truck driver. “I have to say it really touches my soul.”

When officials began closing eating establishments and bars, and eliminating people’s abilities to dine in at those establishments, the need for deliveries to those places slowed tremendously, Colvin said. But the need erupted elsewhere.

He said he began to make deliveries at H-E-B, which had been inundated with customers picking shelves clean of essentials such as toilet paper, bread, meat and more.

“Since people aren’t able to dine in at restaurants, our business has slowed down,” Colvin said. “We’re running loads for H-E-B, which, obviously, is booming right now.”

Truck drivers are essential workers like ranchers and farmers, he said. Colvin said truckers’ services are needed as are the services of health care workers, who get all of his respect.

He started to notice respect on the roads with not as many drivers cutting off the big rigs,and are in general acting nicer to the 18-wheeler drivers, Colvin said.

He’s also noticed a higher respect for people in his line of work coming from others on social media.

“Especially like on Facebook and stuff, people comment and show their appreciation and thank me on a regular basis, which means a lot,” Colvin said. “We all need support and need to feel appreciated and know that we are appreciated.”

People in this area and abroad have responded in various ways to the threat of the spread of the novel coronavirus that causes COVID-19, a respiratory disease that can lead to severe symptoms including fever, cough, breathing trouble and pneumonia. While the disease has spread across the world and proven fatal in some cases, most people affected show mild symptoms.

He knows he risks his health and that of his family members yet he still does the job of delivering the goods America needs, said Billy Dodson, a Seguin resident who has been driving a truck since 1994. He can cross three or four states in a day to make valuable deliveries.

“Eighty percent of what you do or buy is brought by a truck,” Dodson said. “Even the roads you drive on. Somebody’s got to bring in the materials for these roads.”

Jack Brown has been driving a truck for 35 years and feels a tad annoyed as he makes pit stops for food and beverages while on his routes. Because restaurants and bars are barred from having people inside, they have resorted to using their drive-thru windows exclusively, Brown said.

That puts truck drivers at a huge disadvantage.

“They’ve gotten so many of these truck stops that won’t allow us to go through the drive-thru; we have to walk because they’re drive-thru only,” Brown said. “You get tired of eating a cold sandwich. Everybody likes hot coffee.”

He said he understands the necessity of the precautions and that he sees an upswing in people being grateful for truck drivers.

While other companies stepped up to support the fight against the pandemic and the resulting run on goods, H-E-B got help from among its own ranks, spokesperson Julie Bedingfield said. H-E-B truck drivers are doing a phenomenal job, she said.

“Like all of our partners, our transportation partners have been working tirelessly to make sure our stores are getting deliveries around the clock to get customers the items they need,” Bedingfield said. “Texans rely on H-E-B and we rely on our great partners.”

The company recognized the hard work of its transportation, store, manufacturing and warehouse partners by offering them an additional $2 per hour in pay from March 16 through May 10, she said.

“Our transportation partners play a key role in helping to serve our customers and communities and we’re proud of their commitment during this time,” Bedingfield said.

Colvin witnessed first hand how people are helping to serve others and pitching in where needed and the sight has warmed his heart, he said.