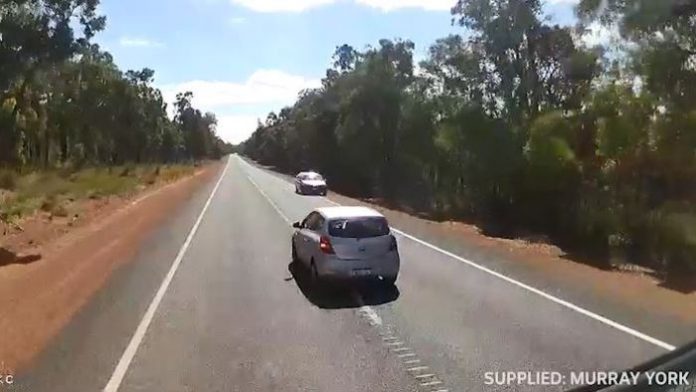 A truckie who has been documenting bad drivers on West Australian roads says he witnesses a driver overtake across double lines or on a blind corner nearly every day.

Murray York, who drives for a Narrikup abattoir, has compiled a shocking collection of near misses on the Albany Highway using his dashcam.

His latest videos show drivers ignoring double lines to pass his truck, pulling out from rest bays without looking, and overtaking perilously close to oncoming traffic.

“You wonder what’s gone through their head to overtake when they can’t see what’s coming,” Mr York said.

“Your adrenalin pumps when it’s a close call — you just think, ‘Why did they do that?’

Mr York said trying to respond to idiotic behaviour on the roads while behind the wheel of a truck or road train was no simple task.

In one video, a hatchback overtakes despite another oncoming vehicle, forcing Mr York and the approaching vehicle onto the gravel verge.

“I’ve pulled over to the left, put wheels on the gravel to try brake so these cars don’t overtake,” he said.

“I’m so glad the car coming the other way pulled off the road too.

“I couldn’t believe it.

“You hang on to the wheel, keep it straight and hope for the best.”

Mr York said more patience was needed from the drivers of smaller vehicles who found themselves travelling behind trucks.

“A bit of patience behind the big truck going slow, maybe the truck will pull to the left so you can see what’s coming, don’t have a guess and go,” he said.

“It might be my daughter over that hill and this car decides to overtake.

“It might put my child’s life in danger, as well as theirs and mine.”

Police are investigating a number of the videos.

‘We are essential’: Amid pandemic, food distribution workers struggle to meet...