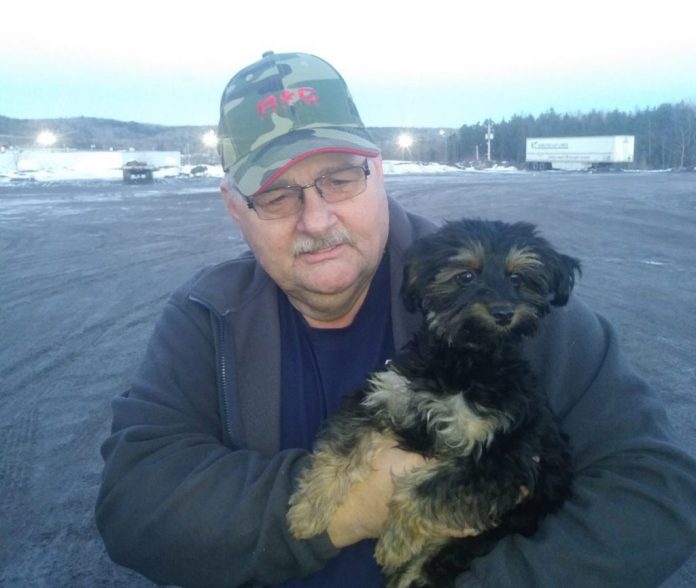 EDWARDSVILLE, N.S. — John Mulrooney, known to his friends as Papa John, has been on the road in all kinds of weather and has seen it all in his 40 years behind the wheel. With 2-1/2 years left to go before retirement, he is still out there doing his job.  “This is all I have ever done.  It’s all I know.”

These are
different days, though.

Mulrooney left Newfoundland on March 28, and he was looking forward to returning home when parked near Campbellton, N.B. on Easter Weekend. But he was bound for Texas instead. Another driver refused to go.

The reality
of his situation hit home when he Facetimed his five-year-old granddaughter who
wanted to know why he didn’t come and see her anymore.

“It is hard out here,” says the S&M Trucking driver, fighting back tears. “I don’t think people really understand the gravity of what we are facing because of Covid-19.  We are that much more alone.

“We can’t
go home, sit down, put our feet up, watch television and make a cup of coffee. Life
on the road is hard at the best of times, but during this pandemic it is worse.
There is no interaction with people, we are alone, isolated in our trucks. When
I get back, I have to self-isolate and I still won’t be able to interact with or
hug my wife and family to make sure I don’t give it to them.  I am not like some guys who have a camper
parked in their backyards to stay in.”

He is grateful for the surge in public support for truck drivers. There have been strangers who have bought his coffee, and offered friendly waves and honks of the horn on the highway. A state trooper and Quebec police officer offered their own honks of support.

“It’s hard out here … I don’t think people really understand the gravity of what we are facing.”

“But not
all of us are delivering in places where we can park in truck stops. Sometimes,
we are in small towns in the middle of nowhere with nothing around us. My wife
puts on a brave front. She is worried about me I can hear it in her voice. She
has her own health issues I worry about when I am gone. We both understand how
it has to be when I come home.”

His life on
the road used to be far more social, with truckers, waitresses and other truck
stop staff sharing jokes during meal time. Downtime is usually spent in truck
stop lounges, discussing the road and watching television. On nice days, there were
even barbecues in truck stop parking lots.

Now every
meal is carried back to the truck for reheating in the microwave.

“I love my
hot sit-down meals,” Mulrooney says. “I haven’t had a hot homecooked meal in
over three weeks. I can get take out burgers at fast food places, but I have
never been one for takeout food.”

He wonders
how much longer he can handle the stress under the current conditions.

“I talked
to a couple of other truckers in the lot the other day. We all just stood there
and cried. One guy hadn’t been home to see his family in nine weeks. He’s
scared to go home because of where he has been,” Mulrooney says.

“As time
goes on, and these conditions continue, there are going to be times of mental
breakdowns. I don’t know how much longer I can take the stress. Somedays you’re
like a powder keg. How do you explain to a five-year-old that you cannot come
and see her?”

Families at home are separated from truck-driving loved ones at the best of times.

Rion Joules, who has been a trucker’s wife for over 16 years, doesn’t feel her husband Richard is in any more danger during these days of Covid-19. Like all longhaul truck operators, Richard drives in all conditions.

And he keeps in touch with their two teenage daughters when he can.

“I think
they are used to this life,” Rion says. “They have never known anything
different. I think if you ask them, they would say it makes them a little more
aware of how careful he needs to be on the road, but he has been sick on the
road before and we all survived that. We will survive this. I am a fairly
capable person.”

“He has been sick on the road before and we all survived that. We will survive this.”

The driver and one of his daughters actually had to self-isolate in an apartment within the house after a recent trip to Ecuador.

“There was
lots of stress and anxiety about getting back to Canada. I was concerned for my
daughter, stressed about money and the prospect of staying until May 1st. At
times we felt as though we were in some sort of reality TV show. To step back
onto Canadian soil made me think, ‘Canada proud, proudly Canadian,” he says.

Richard is
actually looking forward to working alongside fellow truck drivers despite
Covid-19, and he expects few disruptions to his weekly runs to and from
Newfoundland.

“Life with Covid-19 is now our new normal,” he says. “Schedules may get disrupted by the ferries, weather, any number of things. I can minimize the risk to myself, my family, co-workers and customers by washing my hands, don’t touch your face, wear your personal protection equipment when and where necessary, and social distance. Welcome to the world of trucking.”

The driver
is also confident that his fleet, Eassons Transportation Group, continues to
communicate with industry experts and will offer the information and equipment
needed to remain safe.

Still, he
wonders what will happen when he returns home.

“My
daughter and I are going to have to talk to our work colleagues to see how they
feel about where Richard is going and if that is a level of exposure that makes
them uncomfortable,” Rion says. “The best thing for us to do is to keep the
conversation going so that everyone knows what is going on.”

Eskimos no more: Edmonton’s CFL team to change its name