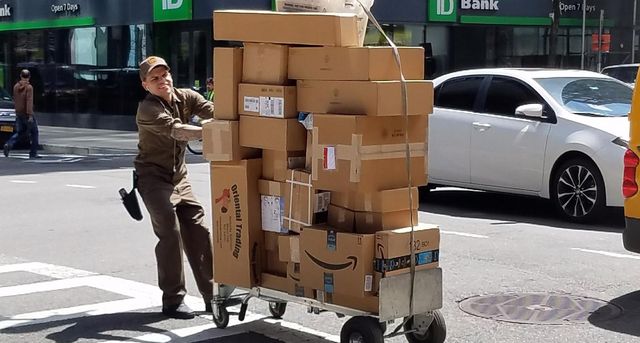 Commercial drivers in the US were facing the beginnings of an economic downturn at the start of 2020, however that changed quickly with the eruption of the COVID 19 pandemic. Freight drivers and logistics workers were called upon to make heavy sacrifices to meet the increased demands for grocery and medical supply as lockdowns were implemented in areas across the US.

The Federal Motor Carrier Safety Administration, which oversees working conditions for commercial drivers, relaxed the limitations on driver’s hours for those hauling essential goods, mainly food and medical supplies. These drivers now face long hours with limited options to stop for food since many rest areas are closed due to state lockdowns.

In comments made to kold.com owner-operator Cassandra Fowler described the conditions truck drivers face, “I can’t even get bottles of water because people are buying out the stores and going to the truck stops because they know [the stops] have it,”

Stacy, a driver who commented on Overdrive.com, pointed to some of the issues drivers are encountering. “I know of three truck drivers who deliver to New York City that are now back in Ontario, Canada sick with COVID-19. One was told that his wife and daughter got COVID-19 from him.”

Stacy demanded that workers should have universal health care. “We need better protection and health coverage for all essential workers in Canada and the US. The ATA and the CTA [American Trucking Association and Canadian Trucking Association] fought against requiring them to pay for hotel rooms for truck drivers to self isolate, or get a shower and clean up in high risk parts of the US and Canada.”

In 2018, according to the ATA, 70.2 percent of all freight in the US was transported by commercial truck. The US trucking industry had $700.1 billion in annual revenue in 2017, with 1.8 million tractor-trailer drivers in the US. According to the Owner–Operator Independent Driver Association (OOIDA) trade group, in the US there are approximately 350,000 to 400,000 owner-operators. On April 3 the OOIDA, issued a plea to the Trump administration for personal protective equipment, rapid-result testing, and access to treatment.

The vast majority of US trucking companies, or 94 percent of carriers, have fewer than 20 trucks in their fleets. The Coronavirus Aid, Relief, and Economic Security (CARES) act was intended to cover two and a half month’s worth of payroll for companies with fewer than 500 employees, and some trucking companies were hesitant about applying for the aid when there was still significant volume.

This April 14, The Commercial Carriers Journal released the results of their survey of 270 US fleets, and of those that responded, 60 percent said they had seen a decline in freight volume. They also reported that many smaller owner-operators were pulling their trucks off the road; the main stated reasons being that rates were too low, the risk of coronavirus and the sharp fall in demand due to the economic collapse.

US transportation industry workers have an average age of 55 years according to US Bureau of Labor Statistics and are often in poor physical condition due to the punishing nature of their work and having few choices for healthy food. This is an area of concern and likely a cause of many injuries and fatalities, as well as increasing drivers’ vulnerability to COVID-19. Drivers are twice as likely as the general population to be suffering from underlying conditions like diabetes according to the Centers for Disease Control (CDC).

Drivers at large freight companies, including those whose employees are covered under a Teamster union contract, such as ABF, YRC and United Parcel Service, face conditions similar to those experienced by owner-operators.

Another key section of essential workers involved in the supply chain are logistics workers, such as those employed at UPS. These workers have faced a sharp increase in the volume of small packages since the outbreak of the pandemic. The second UPS employee in six days died of COVID-19 at the giant Worldport in Louisville, Kentucky on Friday, April 10. According to a memo obtained by WHAS-11 news he had worked in the Day 2 hub, wing B. On April 13 the Teamsters announced the death of the unnamed worker, and reported that the worker had been out sick since April. In a statement on Teamsters Local 89 Facebook page, union officials claimed they were withholding the worker’s name because “We do not wish to bring any further stress to an already grieving family, so out of respect for them we will not publicize this member’s name.”

This past Thursday, another UPS worker death was reported at the company’s hub in Greensboro, North Carolina. UPS officials and the Teamsters are not releasing the name of the worker or the specific cause of death. They said, however, the facility would undergo cleaning, indicating the presence of COVID 19. Teamsters Local 391 posted the news of the death of the UPS workers on its Facebook page. One relative posted a comment complaining of the atmosphere of secrecy maintained by UPS relating to coronavirus. “How do we know if our guys haven’t been exposed or already brought it home. … they [UPS] have to be more transparent.”

For its part, the Teamsters is offering management its collaboration in keeping production moving in order to maintain the flow of profits, meanwhile suppressing worker opposition to inadequate or non existent safety measures.

The measures employed by UPS to meet the threat of COVID-19 infection are largely window dressing, and in any event designed to cost the company the least money and effort. These include temperature checks and social distancing. However, due to the fact that COVID 19 is highly contagious in its pre-symptomatic period, and the close quarters that workers face, these measures are largely ineffective. Throughout the crisis workers have not been given proper safety gear such as facemasks and rubber gloves. Management has also withheld vital information about those who have been infected at UPS facilities due to alleged concerns over privacy.

A UPS worker near Boston, Massachusetts where three workers tested positive for COVID-19, reacted on Facebook to management’s policy of withholding information. “The company handed out letters basically saying regardless of what’s going on UPS is over the law, and we have to keep working as we won’t get any incentives for risking our lives during this. As usual we’re just another body and number to the company.”

Bob, a pre-loader at a hub in Sunnyvale, California told the World Socialist Web Site that a coworker tested positive for COVID-19, but management didn’t report it. “So many people in my hub are saying that [the work] is not worth their lives,” he said. “They’ve been extremely angry. Some are talking about just quitting.”

He explained that the situation was already bad for workers before the coronavirus, and now it’s even worse. “You either have to live with your parents, putting them at risk of contracting the virus and maybe dying, or you have to work multiple jobs to live on your own and put yourself at risk.”

Dylan, a UPS worker at a warehouse near Fremont, California, explained that management provided masks, gloves, and sanitary supplies for the first time only about one week ago. “We only get one N95 mask, if we sign a waiver, along with a small bottle of hand sanitizer. But we’re already a month in, so it feels a little too late.” He explained that in the beginning, management never explained the risks of the virus. “It was business as usual,” he said.

“One of my coworkers had to take his son to the hospital to get tested, then he self-quarantined for two weeks. I’m not 100 percent sure if he had the coronavirus, but when I brought this up to one of our supervisors, he told us not to even talk about it.

“Everybody is mad, all the workers. But I haven’t seen anyone from the union come into our hub. Nothing has really been said about this thing.”

These conditions raise the urgent life-and-death question of establishing workers’ control over health and safety. This cannot be left in the hands of management or the company-controlled unions, but requires the formation of independent rank-and-file workplace committees.

Featured statements on the coronavirus pandemic Photos: Sunny, rainy and a little quirkiness during the coronavirus pandemic...