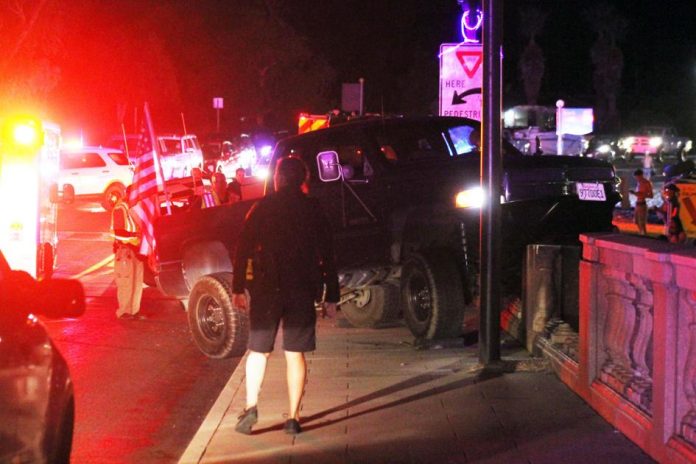 A truck knocked out a large section of the railing along the London Bridge Friday night after crossing left of center.

Around 8:45 Friday night, a truck was reported to be “teetering” off the side of the London Bridge. According to police on scene, a black Dodge pick-up truck with California plates and an American flag hanging in the bed was traveling eastbound on McCulloch Boulevard, about to begin crossing the bridge.

The male driver then veered left of center, striking an off-road vehicle that was traveling westbound on the bridge, causing major rear damage to the off-road vehicle. After striking the other vehicle, the truck continued up onto the sidewalk and through the railing of the London Bridge on the west end near Barley Brothers.

The truck was hanging slightly over the edge and was wedged onto the railing when News-Herald arrived on scene. A large section of the railing was knocked down, leaving a gaping hole in the structure.

Officers on scene reported no known injuries. The male driver of the truck was the sole occupant of the vehicle, but it was unknown how many occupants were in the off-road vehicle.

Impairment is a suspected factor, police say, and the accident is still under investigation.