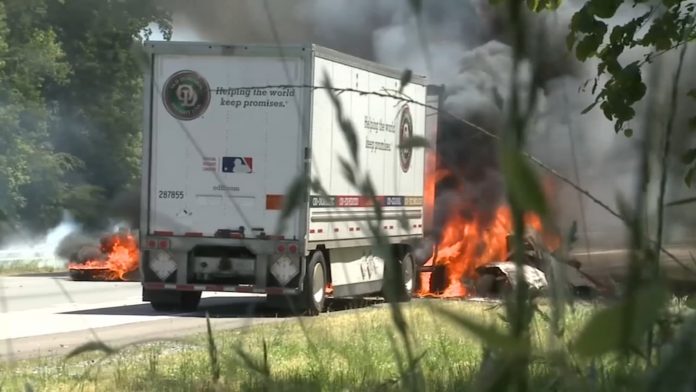 HILLSBOROUGH, N.C. (WTVD) — All lanes of I-85 have finally reopened after several hours after crews cleaned up the remnants of a tractor-trailer chemical fire.

The northbound side at Exit 164, reopened about 6 p.m.

The southbound lanes were closed for two hours but reopened around 2:40 p.m. on Monday.

Investigators say the truck hit a mattress which sparked a fire that moved to the truck’s first trailer.

Once the highly-explosive resin was consumed by the fire, firefighters moved in to extinguish the rest of the fire, which was still burning the load of paper and cloth.

A camera from the North Carolina Department of Transportation showed the vehicle erupting into flames.

The explosion and resin spill led to evacuations of businesses within 1,000 feet. The closures were a precaution because of the high-density vapors.

Two firefighters from the Efland Fire Department were injured when they took off gear that had resin on it, Hillsborough officials said in a news release.

The truck driver was not injured.

“Secure your loads,” deputy Fire Chief Mac Cabe said. “If you lose something on the interstate, it’s dangerous.”